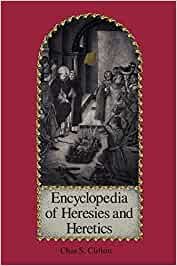 Examines the various heretic movements and individuals throughout Christian history, from the time of Christ's crucifixion to the 16th century Read More
Everyone has heard of the word heresy. Attached to such famous historical figures as Galileo and Joan of Arc, the word heresy today brings to mind an image of individuals or groups that are considered to have been ahead of their contemporaries in thought or action. Prior to the seventeenth century, however, there was not such a high regard for those who digressed from the mainstream. On the contrary, persecution of "heretics" was rampant from the time of the Roman Empire through the sixteenth century. Despite this history of overt intolerance, standard reference works on the subject have been few; and those that do exist are far from comprehensive in scope. Now, the Encyclopedia of Heresies and Heretics offers access to the multitude of controversial people, religious sects, spiritual movements, and other historical events related to heresy.Chas S. Clifton, the author of this authoritative compendium of heresies and heretics, draws upon primary sources and historical analysis to provide insight into such key historical figures as Constantine, the first Christian Roman emperor, and Conrad of Marburg, a ruthless heretic hunter during the Inquisition. Numerous illustrations further depict the prominent people, movements, places, texts, and terms included in this book; and extensive cross-referencing increases the reader's understanding of the social, political, and cultural aspects surrounding each entry.The Encyclopedia of Heresies and Heretics will prove fascinating to the academic and layperson alike. Further research on the topic is encouraged by the full listing of sources in the bibliography at the end of the book. Read Less

Goodreads reviews for Encyclopedia of Heresies and Heretics

A Handbook on the Papacy

A Short History of the Oxford Movement (Faith Press Reprints...

Another little book of saints;: A first introduction