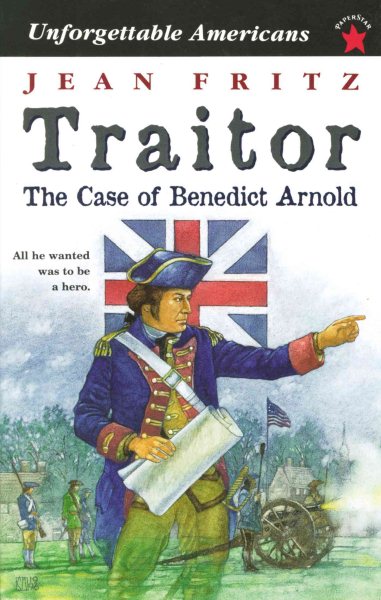 A study of the life and character of the brilliant Revolutionary War general who deserted to the British for money. Read More
Benedict Arnold always carried things too far. As a boy he did crazy things like climbing atop a burning roof and picking a fight with the town constable. As a soldier, he was even more reckless. He was obsessed with being the leader and the hero in every battle, and he never wanted to surrender. He even killed his own horse once rather than give it to the enemy.Where did the extremism lead Arnold? To treason.America's most notorious traitor is brought to life as Jean Fritz relays the engrossing story of Benedict Arnold -- a man whose pride, ambition, and self-righteousness drove him to commit the heinous crime of treason against the United States during the American Revolution.A highly entertaining biography illuminating the personality of a complex man.” Horn BookA gripping story. . . As compelling as a thriller, the book also shines as history.”Publishers WeeklyAn ALA Notable BookA New York Times Book Review Notable Book of the YearA School Library Journal Best Book of the YearAn ABA Pick of the ListsA Horn Book Fanfare Title Read Less