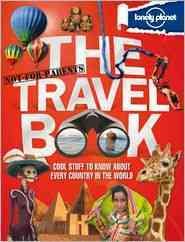 Presents a pictorial guide to travel around the world featuring color photographs and descriptions of more than two hundred countries, along with key facts, maps, cultural insights, and travel tips for each nation. Read More
Lonely Planet: The world's leading travel guide publisher*Shortlisted in the 2012 Australian Book Industry Awards in the Book of the Year for Older Children (age range 8 to14 years) category.Cool stuff to know about every country in the world. Everyone knows which is the world's highest mountain, but do you know which country banned chewing gum? Or what's the world's stinkiest fruit? Or who invented roller skates? Or which building leans more than the Leaning Tower of Pisa? Or where can you eat fried spiders as a snack? Here at Lonely Planet we decided to make a book about the world's countries for children, not parents.The world is a very big place, and in The Not-for-Parents Travel Book we've concentrated on the really interesting bits to create a snapshot of what each country is like. (Warning to parents: these might not be the same "really interesting bits" that you like...where to buy coffee, how many stars the hotel has, what's the phone number for the airport, blah, blah, blah.)In this book are the epic events, amazing animals, hideous histories, funky foods, and crazy facts that make the world's 200 countries so fascinating. Each country has a page to itself-so tiny Tuvalu gets as much space as superpower USA.Authors: Written and researched by Lonely PlanetAbout Lonely Planet: Started in 1973, Lonely Planet has become the world's leading travel guide publisher with guidebooks to every destination on the planet, as well as an award-winning website, a suite of mobile and digital travel products, children's books, and a dedicated traveller community. Lonely Planet's mission is to enable curious travellers to experience the world and to truly get to the heart of the places where they travel.TripAdvisor Travellers' Choice Awards 2012 and 2013 winner in Favorite Travel Guide category'Lonely Planet guides are, quite simply, like no other.' - New York Times'Lonely Planet. It's on everyone's bookshelves; it's in every traveller's hands. It's on mobile phones. It's on the Internet. It's everywhere, and it's telling entire generations of people how to travel the world.' - Fairfax Media (Australia) *#1 in the world market share - source: Nielsen Bookscan. Australia, UK and USA. March 2012-January 2013 Read Less

Goodreads reviews for Not For Parents Travel Book (Lonely Planet. Not for Parents)

You're Not Too Old to Have a Baby

August 21st. The Rape of Czechoslovokia