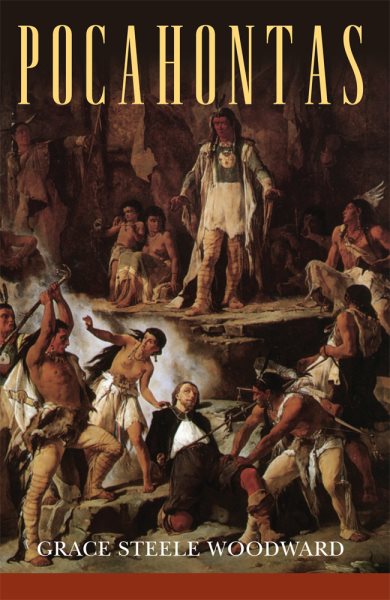 Offers a look at the life of the seventeenth-century Indian princess whose friendship toward the English settlers at Jamestown was a key factor in making the colony a success Read More
Dispelling the clouds of romance and legend that have surrounded Pocahontas throughout the more than two centuries since her death, Grace Steele Woodward here re-creates the life of the Powhatan Indian princess. Indeed, the true story, as it emerges from these pages, is probably more dramatic and certainly more significant for American history than the legend.The story of Pocahontas coincides with the founding of Jamestown, the first permanent English colony in the New World. Her story begins with her first visit to the colony as a child of ten and ends with her journey to England with her English husband, John Rolfe, and their young son.The event which catapulted her to fame was, of course, her rescue of Captain John Smith from murder at the hands of her father, Chief Powhatan, and his warriors. But the more significant contribution she made was her almost singlehanded deliverance of the Jamestown colonists from starvation and massacre. Without her compassionate gifts of food and warnings about her father's plots against them, the Jamestown settlers would probably have met the same fate as that of the Roanoke settlers.Pocahontas' visit to London was arranged by the Virginia Company, which established the Jamestown colony, not only as a gesture of appreciation to the young princess but also as a means of stimulating further interest in New World colonization. It was Pocahontas' final act of devotion to the colonists. She was never to see her homeland again.In preparation for writing this biography, Mrs. Woodward searched out the Virginia settings where Pocahontas lived as a child and those in England which she visited in adulthood. The author studied every pertinent document of the period, from official records of the Virginia Company to letters of highborn Londoners telling about Pocahontas' visit to England and its sorrowful aftermath. Read Less

Goodreads reviews for Pocahontas (The Civilization of the American Indian Series)

The Cherokees (The Civilization of the American Indian Serie...

The Man Who Conquered Pain: A Biography of William Thomas Gr...