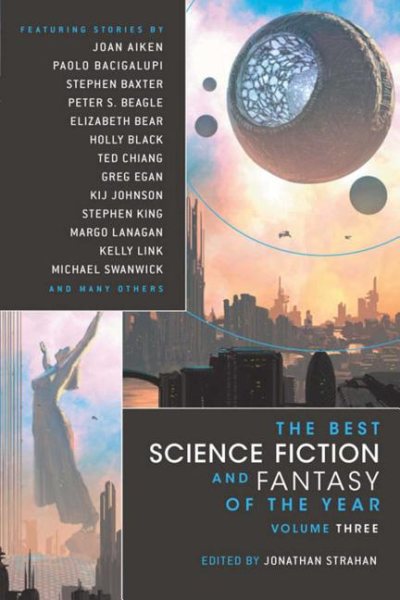 Gathers stories by such writers as Neil Gaiman, Peter S. Beagle, Cory Doctorow, Jeffrey Ford, Walter Jon Williams, Tim Powers, Gene Wolfe, Connie Willis, and Robert Reed. Read More
In print and on-line, science fiction and fantasy is thriving as never before. A multitude of astonishingly creative and gifted writers are boldly exploring the mythic past, the paranormal present, and the promises and perils of myriad alternate worlds and futures. There are almost too many new and intriguing stories published every year for any reader to be able to experience them all. So how to make sure you haven’t missed any future classics?Award-winning editor and anthologist Jonathan Strahan has surveyed the expanding universes of modern sf and fantasy to find the brightest stars in today’s dazzling literary firmament. From the latest masterworks by the acknowledged titans of the field to fresh visions from exciting new talents, this outstanding collection is a comprehensive showcase for the current state of the art in both science fiction and fantasy. Anyone who wants to know where the future of imaginative short fiction is going, and treat themselves to dozens of unforgettable stories, will find this year’s edition of Best Science Fiction and Fantasy to be just what they’re looking for!The depth and breadth of what science fiction and fantasy fiction is changes with every passing year. The stories chosen for this book by award-winning anthologist Jonathan Strahan carefully maps this evolution, giving readers a captivating and always-entertaining look at the very best the genre has to offer. Jonathan Strahan has edited more than twenty anthologies and collections, including The Locus Awards, The New Space Opera, The Jack Vance Treasury, and a number of year's best annuals. He has won the Ditmar, William J. Atheling Jr., and Peter McNamara Awards for his work as an anthologist, and is the reviews editor for Locus. Read Less

Goodreads reviews for The Best Science Fiction and Fantasy of the Year, Vol. 3

The Best of Larry Niven