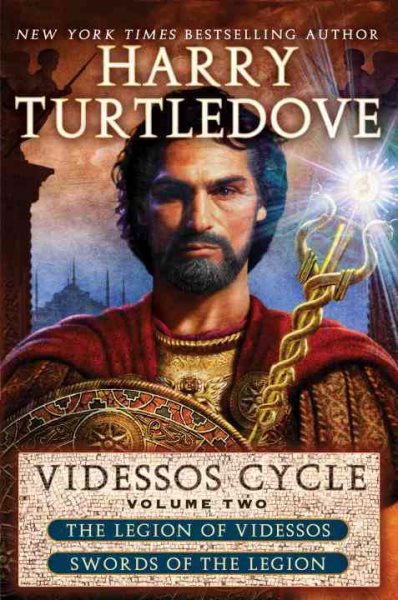 Marcus Scaurus, leader of a Roman legion mysteriously transported to a world of magic, defeats an army of rebel mercenaries and returns to the city of Videssos, only to encounter deadly intrigue, treason, and betrayal. Read More
The classic fantasy series from “one of alternative-history’s stalwarts” (The New Yorker) continues in the adventure of a lifetime.   Harry Turtledove’s brilliant re-imaginings of major world events have thrilled fans for decades, but he first captured readers’ attention with the Videssos Cycle, a unique blend of fantasy and speculative history. In this two-book volume, a Roman legion, thrown into another world, fights its way through sorcery, intrigue, and epic conflict.   THE LEGION OF VIDESSOS   Since the legion was mysteriously transported to this magical realm, Roman military tribune Marcus Aemilius Scaurus has valiantly served the rulers of the war-torn city of Videssos. However, Fortune is a fickle goddess. Returning in triumph after defeating a well-entrenched army of rebel mercenaries, Marcus is betrayed by a friend, seized as a traitor, and dragged before the Emperor. Only one person may be able to save him: the Emperor’s niece. But consorting with her could lead to exile . . . or worse.   SWORDS OF THE LEGION   As prisoner of the Emperor, Marcus Scaurus is in a desperate situation. He stands condemned for treason, unless he can reclaim a rebel province from a fanatic usurper—without the aid of his Romans. Now, with just one centurion by his side, Marcus sets out to once again do the impossible. Soon the fates conspire against the men, driving them toward the torture chambers of an evil, deathless wizard-prince. But an audacious last hope rallies behind them—the soldiers of the legion are on the march. Read Less