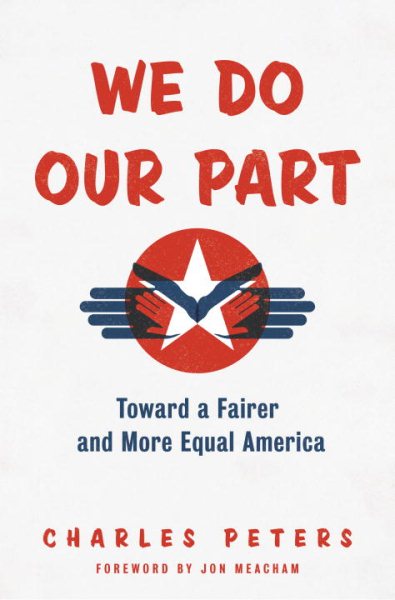 The founder of "Washington Monthly" describes the drastic and negative changes occuring in Washington, D.C., that are driving the economic divide and culture of consumerism. Read More
Charles Peters tells the story of “how Democrats lost their way—and how they can find it again” (The Washington Post) in a book “full of vivid, funny, often touching anecdotes” (The Atlantic). “We Do Our Part” was the slogan of Franklin Delano Roosevelt’s National Recovery Administration—and it captured the can-do spirit that allowed America to survive the Great Depression and win World War II. Over the course of a sixty-year career as a Washington, D.C., journalist and historian, Peters, the founder of the Washington Monthly, has witnessed drastic changes firsthand. Ranging from the history of lobbying to the explosion of high-end fashion and travel reporting, this surprising book explains how we can consolidate the gains we have made while recapturing the generous spirit we have lost. We Do Our Part is entertaining, insightful, and engaging. Spanning decades of politics and culture, Peters compares the flood of talented, original thinkers who flowed into the nation’s capital to join FDR’s administration with the tide of self-serving government staffers who left to exploit their opportunities on Wall Street and as lobbyists from the 1970s to today. He explains that too many Democrats lost touch with the average American as the liberal elite became more concerned with being smarter, having better taste, and making more money than with understanding why the average worker was making less and resented being looked down on. He cites as an example Hillary Clinton’s failure to understand what was wrong with taking a six-figure speaking fee from Goldman Sachs or with calling people “a basket of deplorables.”  If liberal Democrats—and Peters is one—want to win again, they need to be fair to everyone, including the working man who was once essential to the party of FDR. We Do Our Part shows us where we have been and where we are going, drawn from the invaluable perspective of a man who has seen America’s better days and still believes in the promise that lies ahead.Praise for We Do Our Part“[Peters] weaves a synthesis of mainstream and progressive, centrist and popular thought that would re-anchor the Democratic Party, both in its own traditions and in outreach to the restless, angry swath of the country that elected President Trump. . . . Peters is an American original.”—The Washington Post“A great book about modern American history.”—Chris Matthews, Hardball“Part joyful memoir, part shrewd political analysis, and part insightful cultural criticism . . . [Peters] offers a keen understanding of where the Democrats went wrong in scorning the kind of people in Appalachia that he grew up with”—Walter Shapiro, Roll Call“We Do Our Part is not directly about the Trump era or phenomenon, though Charlie gets to Trump at the end. But it is all about the resentful, unequal, uncaring parts of today’s American culture that Trump has inflamed and that have made Trump possible—and how to cope with them.”—James Fallows, The Atlantic “An important book . . . The truth [Charles] Peters aims to impart in this book is one that all Americans, and especially liberals, need to understand: An America in which the elite serves the interests of the majority isn’t a pipe dream.”—Washington Monthly “A wise and brilliant book by a wise and brilliant man . . . Everyone should read it.”—Nicholas Thompson, editor, newyorker.com Read Less

Goodreads reviews for We Do Our Part: Toward a Fairer and More Equal America

Five Days in Philadelphia: The Amazing "We Want Willkie!" Co...

Tilting at Windmills: An Autobiography