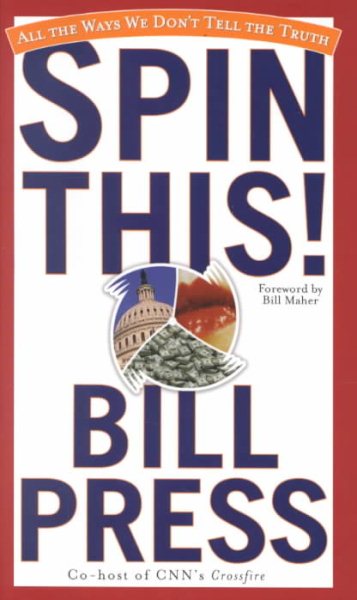 Provides an introduction to the art of spin as it is practiced by the media, politicians, ad writers, lawyers, and others and describes how to identify "spin," how to see through it, and how to use it to further one's own agenda. Read More
We're all familiar with the warning, "Don't believe everything you see or hear." Bill Press, the popular co-host of CNN's Crossfire, will have you wondering whether you should believe anything at all. Spin -- intentional manipulation of the truth -- is everywhere. It's in the White House, in the courtrooms, in headlines and advertising slogans. Even couples on dates -- not to mention book jackets -- are guilty of spin. Now, analyst Bill Press freeze-frames the culture of spin to investigate what exactly spin is, who does it and why, and its impact on American society as a whole. Depending upon who is doing it, spinning can mean anything from portraying a difficult situation in the best possible light to completely disregarding the facts with the intent of averting embarrassment or scandal. Using examples drawn from recent history -- the Clinton presidency, the Florida recount, and the Bush White House -- Press first probes spin's favorite haunt: politics. In addition to surveying the incarnations of spin in the fields of journalism, law, and advertising, Press also chews on the spin of sex and "dating," a word that has become the very embodiment of spin. Perhaps surprisingly, however, Press argues that spin isn't all bad, and that without it the harsh truths of our times might be too tough to swallow. With the same keen sense of humor that helped make CNN's Crossfire television's premier debate show and the limited run of The Spin Room so popular, Press turns the tables on the prime purveyors of spin -- called spin doctors -- noting some of their biggest guffaws and blunders. As Press notes, it has become abundantly clear that the twenty-first century, beginning as it has with a president who was "spun into office," will be a fertile stomping ground for spin. Read Less

Goodreads reviews for Spin This!: All the Ways We Don't Tell the Truth