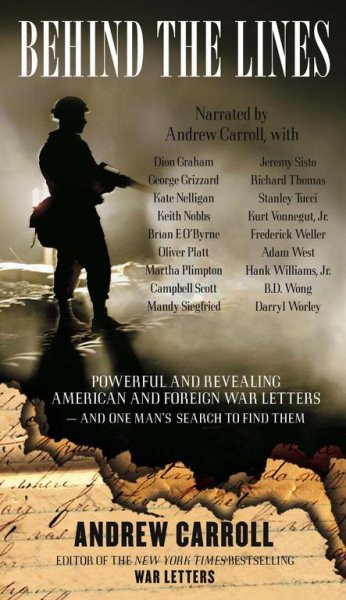 An exploration of warfare from the perspectives of soldiers and civilians draws on letters collected by the author during his search for wartime correspondences, featuring the writings of soldiers from every major American conflict. Read More
For three years Andrew Carroll traveled throughout the United States and around the world to seek out the most powerful and unforgettable letters ever written during US wars.Behind the Lines is the result of that extraordinary trip and represents the first audiobook of its kind: a dramatic, intimate, and revealing look at warfare as seen through the personal correspondence of US and foreign troops and civilians who have experienced major conflicts firsthand. From handwritten missives penned during the American Revolution to e-mails from Afghanistan and Iraq, Behind the Lines captures the full spectrum of emotions expressed in times of war.Like Carroll's phenomenal national bestseller War Letters, Behind the Lines is part of a larger effort to preserve correspondence that is riveting, insightful, and historically significant. This audiobook is also about Carroll's journey across the globe to visit the fields of battle where so many of these letters were written, meet with veterans and active duty troops who generously agreed to share their private correspondence, and speak with the family members who have lost their loved ones to combat.Behind the Lines is a tribute to those who have fought for freedom, as well as a lasting reminder to present and future generations of the true nature of warfare and the sacrifices it demands of individuals, families, and entire nations. Read Less

Goodreads reviews for Behind the Lines: Powerful and Revealing American and Foreign War Letters and One Man's Search to Find Them

Home Life in the Bible