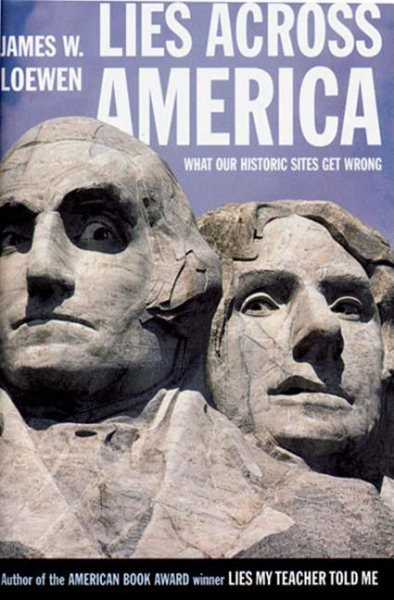 Examines more than one hundred sites that promote incorrect interpretations of history and raises questions about what Americans choose to commemorate Read More
The fabulous sequel to the bestselling, award-winning "Lies My Teacher Told Me." James Loewen's last book, Lies My Teacher Told Me, a debunking of the twelve leading high-school American history textbooks, won the American Book Award, the AESA Critics' Choice Award, and the Oliver Cromwell Cox Award for Anti-Racist Scholarship. It has sold more than a quarter-million copies in its various editions. Now, using the same irrepressibly honest approach and the same subversive take on all things bogus and misinformative, Loewen has identified a whole new arena for his one-of-a-kind inquiries into the way we tell our country's story. Lies Across America looks at more than one hundred sites where history is told on the landscape, including historical markers, monuments, outdoor museums, historic houses, forts, and ships. Loewen uses his investigation of these public versions of history, often literally written in stone, to correct historical interpretations that are profoundly wrong, to tell neglected but important stories about the American past, and, most importantly, to raise questions about what we as a nation choose to commemorate and how. Lies Across America offers startling revelations about sites we think we know: Valley Forge, Abraham Lincoln's log cabin, the Intrepid. It also tells of new sites, events, and individuals that should be commemorated on the landscape but aren't: a tombstone with a story to tell in Mississippi, a spy in the Confederate White House, the unforeseen fallout from the first nuclear missile test, the reverse underground railway, a modern "sundown" town (blacks can work there, but they'd better leave before the sun sets). It asks why, across our landscape, Indians are consistently "savage," tribal names are wrong and derogatory, whites "discover" everything, and the term "massacre" is a one-way street; why war museums have selective memories, guides at FDR's family mansion in Hyde Park are "specifically forbidden" to talk about Roosevelt's mistress, and James Buchanan's house makes no mention of the fact that he was gay. It muses about the Civil War mare in Kentucky who got an extra body part, the Polynesian King made to look like a Roman emperor on monuments in Hawaii, and the statue of a conquistador in New Mexico who lost his foot. This book is a reality check for anyone who has ever sought to learn about America through our public sites and markers. It is destined to change the way we see our country. Lies Across America includes: - Sites from all fifty states plus the District of Columbia, organized geographically, west to east - Introductory essays on: the role that monuments, markers, and other historic sites play in our society; how historic markers get on the landscape in the first place; what historic markers say about the era they commemorate versus the era in which they were erected; the visual symbolism of monuments and memorials; the way historical markers are revised over time (including natural forces, spray paint, and dynamite) - A list of twenty candidates for "toppling"--markers so distorting or inaccurate they should be removed or rewritten immediately -Forty black-and-white photos of notably interesting and/or awful markers Read Less

Goodreads reviews for Lies Across America: What Our Historic Sites Get Wrong

Lies My Teacher Told Me : Everything Your American History T...