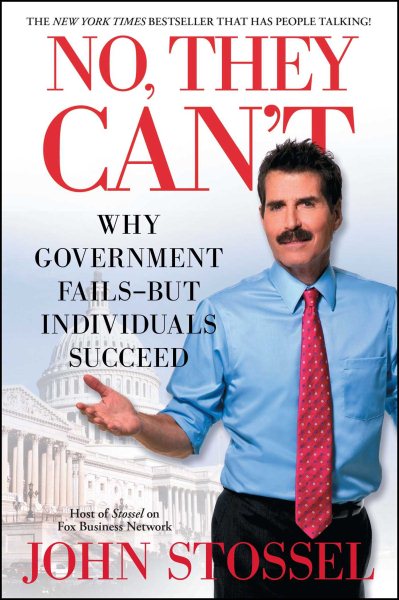 Challenges popular beliefs that government action is the best way to solve a problem, offering evidence in support of such controversial topics as government's inappropriate existing role in health care, the ineffectiveness of food bans and the failures of government- and union-run educational systems. Reprint. 350,000 first printing. Read More
New York Times bestselling journalist John Stossel shows how the expansion of government control is destructive for American society.Politicians&apos;and we voters&apos;can dream of guaranteed incomes or green energy. But the mature response to cries of &apos;Yes, we can!&apos; should be &apos;No, we can&apos;t&apos;&apos;not when &apos;we&apos; means government. There is nothing that government can do that we cannot do better as free individuals. &apos;John Stossel in No, They Can&apos;t John Stossel debunks the most revered of society&apos;s sacred cows in this spirited New York Times bestseller: our belief that government can solve our problems. Stossel insists that we discard the myth of the &apos;perfect&apos; government&apos;left or right&apos;and retrain our brain to rethink our lives as independent individuals in light of such topics as HEALTH CARE &apos; DEFENSE SPENDING JOB CREATION &apos; GUN CONTROL PUBLIC EDUCATION &apos; ENERGY MINIMUM-WAGE LAWS &apos; CLIMATE CHANGE THE NATIONAL DEBT &apos; POLITICAL CORRECTNESS THE ASSAULT ON FOOD . . . and much more! Read Less

Goodreads reviews for No, They Can't: Why Government Fails-But Individuals Succeed