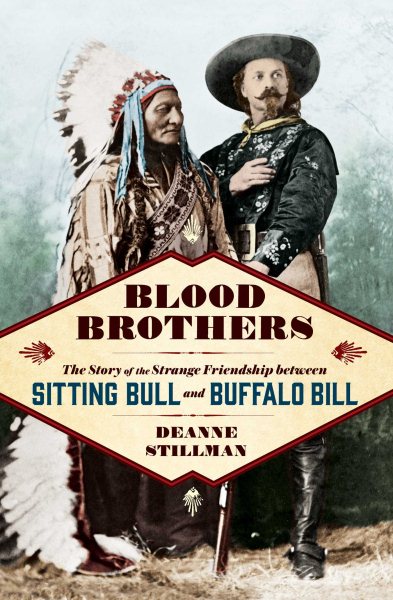 Documents the unlikely friendship between Buffalo Bill Cody and Sitting Bull, tracing the events of their brief but important collaboration during Cody's 1880s Wild West Show, the impact of Little Big Horn, and Sitting Bull's assassination in 1890. Read More
Winner of the 2018 Ohioana Book Award for Nonfiction&apos;Deanne Stillman&apos;s splendid Blood Brothers eloquently explores the clash of cultures on the Great Plains that initially united the two legends and how this shared experience contributed to the creation of their ironic political alliance.&apos; &apos;Bobby Bridger, Austin Chronicle The little known story of the unlikely friendship of two famous figures of the American West&apos;Buffalo Bill Cody and Sitting Bull&apos;told through their time in Cody&apos;s Wild West show in the 1880s.It was in Brooklyn, New York, in 1883 that William F. Cody&apos;known across the land as Buffalo Bill&apos;conceived of his Wild West show, an &apos;equestrian extravaganza&apos; featuring cowboys and Indians. The idea took off. For four months in 1885 the Lakota chief Sitting Bull appeared in the show. Blood Brothers tells the story of these two iconic figures through their brief but important collaboration. Blood Brothers flashes back to 1876, when the Lakota wiped out Custer&apos;s 7th Cavalry unit at the Little Big Horn. Sitting Bull did not participate in the &apos;last stand,&apos; but was nearby&apos;and blamed for killing Custer. The book also flashes forward to 1890, when Sitting Bull was assassinated. Hours before, Cody rushed to Sitting Bull&apos;s cabin at Standing Rock, dispatched by the army to avert a disaster. Deanne Stillman unearths little told details about the two men and their tumultuous times. Their alliance was eased by none other than Annie Oakley. When Sitting Bull joined the Wild West, the event spawned one of the earliest advertising slogans: &apos;Foes in &apos;76, Friends in &apos;85&apos;&apos;referring to the Little Big Horn. Cody paid his performers well, and he treated the Indians no differently from white performers. During this time, the Native American rights movement began to flourish. But with their way of life in tatters, the Lakota and others availed themselves of the chance to perform in the Wild West. When Cody died in 1917, a large contingent of Native Americans attended his public funeral. An iconic friendship tale like no other, Blood Brothers is truly a timeless story of people from different cultures who crossed barriers to engage each other as human beings. And it foretells today&apos;s battle on the Great Plains. Read Less

Goodreads reviews for Blood Brothers: The Story of the Strange Friendship between Sitting Bull and Buffalo Bill

Mustang: The Saga of the Wild Horse in the American West

Desert Reckoning: A Town Sheriff, a Mojave Hermit, and the B...

Twentynine Palms: A True Story of Murder, Marines, and the M...