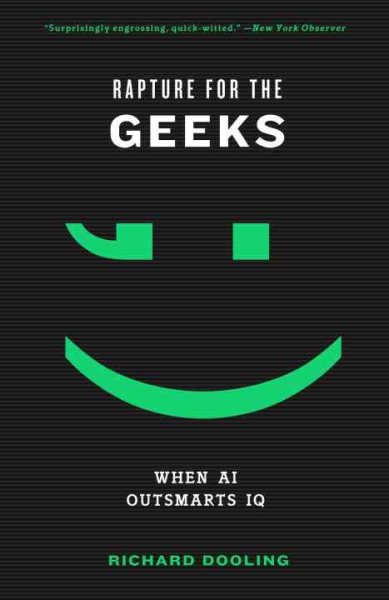 Looks at the rapid pace with which technology is changing, as well as the impact on human life in a high-tech world in which computers surpass humans in intelligence. Read More
“Nimble and entertaining . . . A fascinating historical review of our longtime obsession with machines.” –David Takami, Seattle TimesIn Rapture for the Geeks, Richard Dooling looks at what some of the greatest minds have to say about our roles in a future in which technology rapidly leaves us in the dust. Is the era of Singularity, when machines outthink humans, almost upon us? Will we be enslaved by our supercomputer overlords, as many sci-fi writers have wondered? Or will humans live lives of leisure with computers doing all the heavy lifting? With antic wit, fearless prescience, and common sense, Dooling provocatively examines nothing less than what it means to be human in what he playfully calls the age of B.S. (before Singularity)–and what life will be like when we are no longer alone with Mother Nature at Darwin’s card table. “One doesn’t expect a nonfiction book to be fascinating, chilling, thoughtful, and funny in equal measure. This one is.”–Kurt Andersen“Dooling really is onto something here.”–Ars Technica Read Less

Goodreads reviews for Rapture for the Geeks: When AI Outsmarts IQ