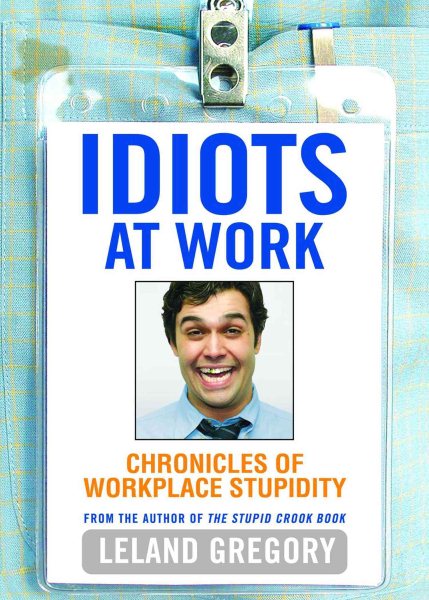 Presents a collection of foolish things people say or do in business, and includes poorly written warning labels found on products. Read More
What's the strangest question employers have been asked during an interview? Among the responses:* What is it you people do at this company?* Why aren't you in a more interesting business?* Will the company move my rock collection from California to Maryland?* Does you company have a policy regarding concealed weapons?--from Idiots at Work: Chronicles of Workplace StupidityLeland Gregory once thought crooks, politicians, and lawyers were the greatest nitwits out there, but it turns out that the working masses are packed with the dumb, dumber, and dumbest humans on the face of the planet. Gregory's look at nincompoops, Idiots at Work: Chronicles of Workplace Stupidity, makes it crystal clear that the world's biggest jerks are on the job. Consider these examples:* The woman who sued Eastman Kodak to improve the lighting conditions on her job...in a darkroom?* The Ontario Federation of Labor, which installed a bad boss hotline to get a handle on labor problems--only to have the system crash soon after startup because too many calls came in.* The interviewee who wore a Walkman, explaining that she could listen to the interviewer and the music at the same time.Gregory has made a career out of finding the imbeciles of the world and sharing their antics with the rest of us. His AMP humor compilations What's the Number for 911?, What's the Number for 911 Again?, The Stupid Crook Book, and Hey, Idiot! were all hilarious, but Idiots at Work takes the cake. The book is filled with hilarious tales of moronic managers, office idiots, stupid shareholders, daft decision-makers, poor planners, and other outstanding examples of cubical klutzes.  Read Less

Goodreads reviews for Idiots at Work: Chronicles of Workplace Stupidity