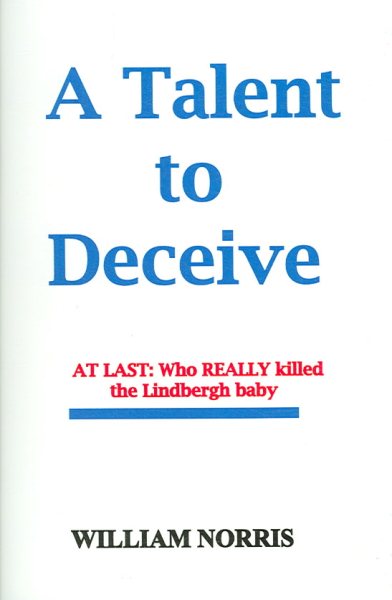 The kidnapping and murder of Charles Lindbergh's infant son, and the subsequent trial and execution... Read More
The kidnapping and murder of Charles Lindbergh's infant son, and the subsequent trial and execution of Bruno Richard Hauptmann, have been a source of fascination for more than 70 years. Now, for the first time, William Norris delves into sources of information ignored by previous investigators and comes up with the identity of the true culprit. Lindbergh is exposed as having obstructed the investigation and lied on oath in order to secure the conviction of Hauptmann. His motive: to avoid the public scandal which would break if Dwight Jr, his brother in law and scion of one of America's most wealthy and prestigious families, were to come under investigation. Dwight Jr. hated Lindbergh for marrying his sister Anne and usurping his position in the Morrow family. The birth of the Lindbergh's son was a further blow. He was schizophrenic, heard "voices", and had been confined to mental institutions for long periods immediately prior to the kidnap. Indeed, he was under treatment for the rest of his life. Following the death of his father in October 1931, Dwight Jr. was said to have been angry at the lack of any specific bequest in his father's will. His inheritance (like those of the other children) was to be left to the discretion of his mother - who did not like him much. Rumour, contained in letters to Hoffman, suggests that he approached his mother and demanded $50,000, which was refused. He made the same demand of Lindbergh, and was again turned down. There was a row, and he left swearing vengeance. $50,000, of course, was the amount of the ransom demand - a ridiculously low sum, given the wealth of the Morrows, if this had been a professional job. It was also the amount bequeathed to Dwight Jr in his mother's will on her death in 1955, as a specific addition to the equal share in her estate given to the other surviving children. No other researcher has ever discovered this. Was Elizabeth Morrow leaving a message from beyond the grave, finally pointing the finger at her errant son? Was she saying: "Take your damned $50,000!" Coupled with all the other evidence, circumstantial though it may be, Norris thinks so. Charles Lindbergh, now known to have been the father of seven illegitimate children, is exposed as a great deceiver who was guilty of being the instigator of judicial murder. It is time the story was told. Read Less

Goodreads reviews for A Talent to Deceive: Who Really Killed the Lindbergh Baby?

Man Who Fell from the Sky: The True Story Gaudy Life Bizarre...