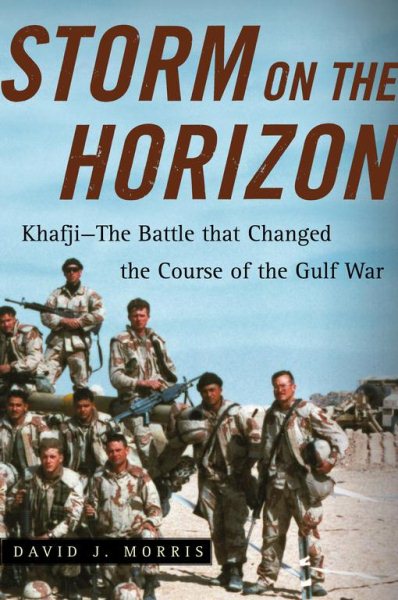 An account of a pivotal Gulf War battle describes an offensive launched by Saddam Hussein that failed due to the resolve of an underdog band of marines and air soldiers, and discusses its significance to the outcome of the conflict. Read More
Storm on the Horizon is the little-known story of the key land battle of Desert Storm: the Battle for Khafji -- and how that engagement has become part of military history. Combining some of the most powerful writing on war ever with a Marine's eyeview of combat, former Marine officer David J. Morris has brilliantly recreated this crucial battle that nearly changed the outcome of the Persian Gulf War. Storm on the Horizon is war writing at its finest.On January 29, 1991, Saddam Hussein launched his three best armored divisions across the Kuwaiti border and into the Islamic Holy Land of Saudi Arabia. Their mission: to disrupt the massive U.S.-led Coalition preparing to evict them from Kuwait, and to bloody the Americans on CNN. Caught without warning in the path of this juggernaut were scattered groups of lightly armed U.S. Marines and Special Forces soldiers. Storm on the Horizon is the gripping and compelling story of how these elite fighting men escaped the Iraqi onslaught and reversed the assault with an unprecedented combination of high-tech weaponry and American know-how. This is the story of the first battle of the smart-bomb age.Storm on the Horizon drops you in the middle of the most intense battle of the Persian Gulf War. The Marines are trapped and outnumbered, their weapons no match against the Iraqi tanks bearing down on them. Their only lifeline to the rear is a barely functioning radio. Drawing upon extensive veteran interviews and previously classified reports, David J. Morris's vivid minute-by-minute narrative takes you through the battle from its beginning as a scattered collection of skirmishes to its fiery final act in the streets of the abandoned Saudi Arabian town of Khafji. Morris captures this ordeal through the eyes of the men who were there, giving readers a rare front-row seat to an incredible sequence of events. Max Morton, the pilot of a Cobra attack helicopter is forced to make an emergency landing in the heart of Khafji as the Iraqis are attacking. He and his crew narrowly escape after locating a tank of mystery fuel at a local oil refinery. Medic Kevin Callahan, member of a team of Marines caught behind enemy lines, watches helplessly as a female U.S. Army soldier and her male comrade are captured by Iraqi soldiers and spirited to Baghdad. Ronald Tull, suffering untold wounds, wakes up next to his burning light-armored vehicle thinking that it has been struck by an enemy tank round. Only later does he learn the full horror of the events that led up to the death of his seven buddies who were on board.But Storm on the Horizon is far more than a battle saga. It is a thoughtful examination of a new generation of fighting men coming to terms with its own war, a journey into the minds of men under supreme stress, and a heartfelt account of the innocence lost in a heartbeat and mourned for a lifetime.At once an unflinching chronicle of men at war and an appalling tableau, Storm on the Horizon looks into the savage heart of modern combat and raises troubling questions about the era of conflict that lies ahead. Read Less

Goodreads reviews for Storm on the Horizon: Khafji--The Battle that Changed the Course of the Gulf War

The Evil Hours: A Biography of Post-Traumatic Stress Disorde...

Storm on the Horizon: Khafji--The Battle That Changed the Co...

Self Reliant Cities: Energy and the Transformation of Urban...