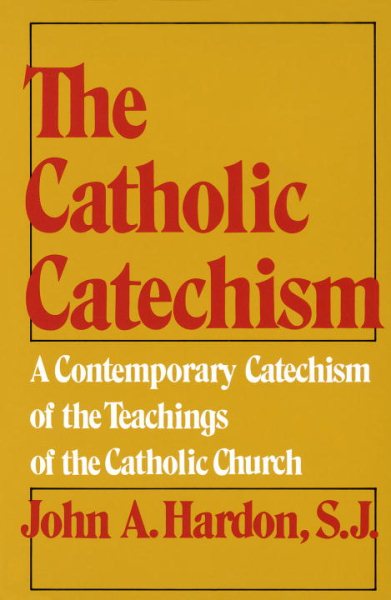 A compendium-source book of the principal teachings of the Catholic Church, concentrating on significant aspects of belief and conduct relating to accepted faith, morality, and ritual and designed as a manual for catechetical instruction Read More
"This volume is intended to meet a widely felt need for an up-to-date and concise source book on the principal teachings of the Catholic Church. Since the close of the Second Vatican Council, there has been such an accumulation of ecclesiastical constitutions and decrees and so many changes they introduced in Catholic practice that few people have been able to keep up with all that has happened... A parallel purpose of this volume is to offer those who use it a handy guidebook of the Catholic tradition, whether formally documented in ecclesiastical sources or implicitly accepted by the faithful under the aegis of the Church's hierarchial leaders."The method followed in presenting the Church's doctrine is a combination of history and logic. Doctrines are placed into a historical framework by tracing their origins to the Old and New Testaments and placing their development within the context of persons, places, and times. The doctrine thus becomes more intelligible because it is viewed in the setting of its vital growth over the centuries."The intended reading audience of this Catholic catechism are all those priests, religious and laity, and above all parents and teachers, who are looking for a concise statement of the faith they profess, the conduct they practice, and the worship they give to the Lord."--From The Catholic Catechism by John A. Hardon, S.J. Read Less

Goodreads reviews for The Catholic Catechism: A Contemporary Catechism of the Teachings of the Catholic Church