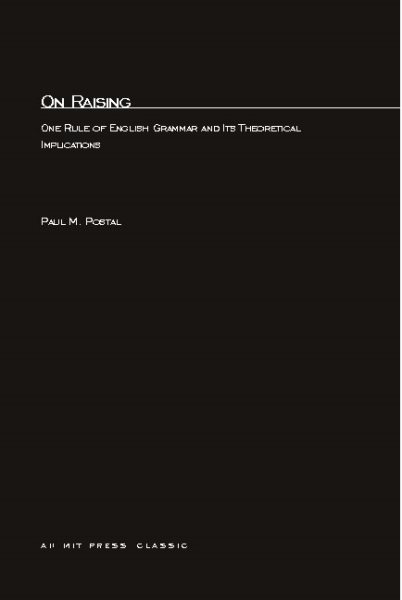 Arguing the claim that English has a Raising rule that produces derived main clause objects. Read More
For some time it has been generally accepted by students of English grammar that a rule of Raising exists and that it functions to produce derived main clause subjects. Following Rosenbaum's work, it has also been widely accepted that this rule functions in a specified class of cases to derive main clause objects. However, in recent work, Chomsky has rejected the view that there is any Raising rule that produces derived main clause objects. According to his latest position, only the derived subject function of the rule is an actual feature of English grammar. On Raising is highly critical and is devoted chiefly to supporting the claim that English does contain a rule of Raising—a rule that has the function of taking the complement subject noun phrase in certain complement constructions and reassigning it as a constituent of the main clause. The author presents something on the order of two dozen arguments that Raising produces derived objects. In the course of this discussion, he also considers various other theoretical and descriptive consequences of, and questions raised by, the existence of Raising. Read Less

Goodreads reviews for On Raising: One Rule of English Grammar and Its Theoretical Implications (Current Studies in Linguistics)