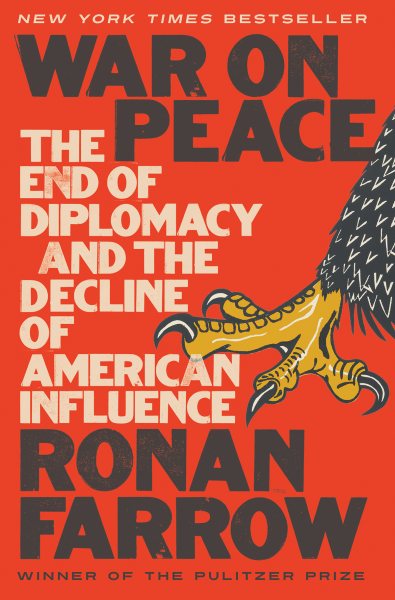 A notable journalist presents a harrowing exploration of the collapse of American diplomacy and the abdication of global leadership. Read More
Award-winning investigative journalist Farrow puts the spotlight on American diplomacy and its devolution. Already, by the time of 911, the State Department had eliminated 20 percent of its staff, and those remaining were undertrained and under-resourced. The 1990s saw the U.S. international affairs budget cut by 30 percent-similar to the cuts requested by the Trump administration. Sometimes framed as a champion of diplomacy—e.g., the Iran deal and the Paris Climate Change Accord—the Obama administration, out of the gate, accelerated trends that together have ravaged America’s diplomatic capacity during the Trump administration. To a lesser extent than Trump, but greater in extent than those before him, Obama also surrounded himself with a posse of retired generals or other military officers in senior positions. In addition, his administration sold more arms than any other since World War II. One diplomat, whose career had covered 35 years, was notified of his firing in January 2017, while in the Middle East on a mission a few hours before critical contact with foreign governments. Later, bidding adieu to more than 100 other career officers he warned that “a foreign policy without professionals is by definition an amateur foreign policy.” Annotation ©2018 Ringgold, Inc., Portland, OR (protoview.com) Read Less

Goodreads reviews for War on Peace: The End of Diplomacy and the Decline of American Influence

A Twist of Lyme: Battling a Disease That "Doesn't Exist"

Empire of Sand (The Books of Ambha)