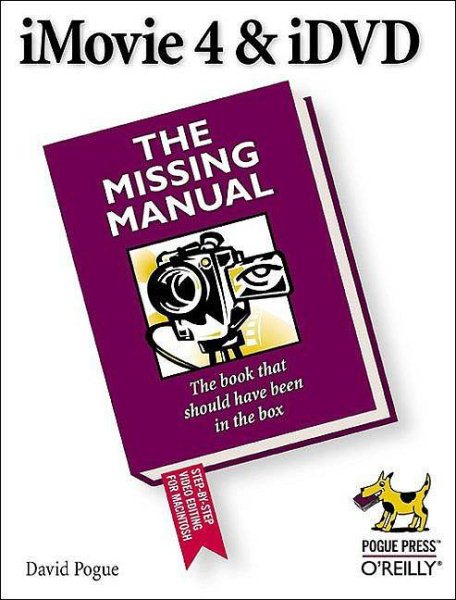 Explains how to use the Macintosh video production programs to capture and edit digital videos, apply effects, create DVD menus, and burn DVDs. Read More
At first glance, iMovie 4 looks identical to iMovie3. But under the hood, dozens of annoyances have been eliminated and dozens of polished touches have been added. The program tweaks include: editing enhancements, better navigation, and audio improvements. iDVD 4 has undergone a more thorough overhall that makes DVDs look even more like a commercial Hollywood DVD. iDVD removes many of the limits in the previous versions. Improvements here include: increasing the number of buttons on a menu page from 6 to 12, extending the background music on the menu screen to 15 minutes, allowing up to 99 chapter markers, and extending the amount of burnable video to two hours.iMovie 4 & iDVD: The Missing Manual has been updated to reflect all of these changes in detail and with scrupulous objectivity. This witty and entertaining guide from celebrated author David Pogue covers every step of iMovie video production, from choosing and using a digital camcorder to burning the finished work onto DVDs. The book also provides a firm grounding in basic film technique. Read Less

macOS Mojave: The Missing Manual: The book that should have...