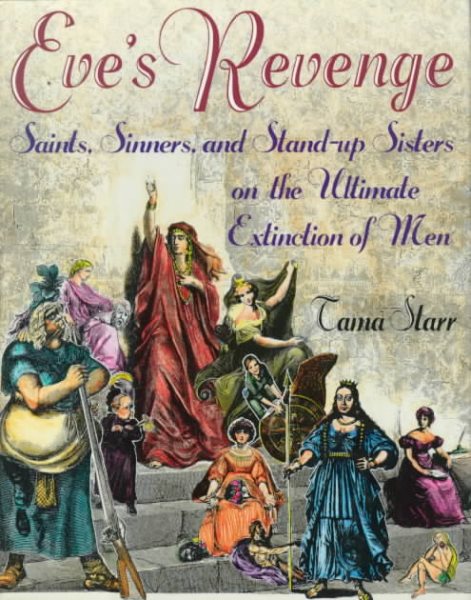 A collection of wise and witty quotes from women about men includes the commentary of St. Catherine of Siena, Zsa Zsa Gabor, Mae West, Andrea Dworkin, and others Read More
Men are beasts, authorities throughout the ages have agreed. Here, scolars of male behavior from St. Catherine of Siena ("Let not thy misfortune be such as to enter into any private conversation, with monk or layman.") to Zsa Zsa Gabor ("A man is incomplete until he is married. Then he is finished."), from Mae West ("Give a man a free hand and he'll run it all over you"), to Andrea Dworkin ("Intercourse is the pure, sterile, formal expression of men's contempt for woman") offer suggestions on what to do about, with, and without men. In this magnificent compendium of wise and unwise words and warnings from "the fair sex" about the opposite sex, Tama Starr offers a tantalizing companion to her collection of infuriating comments by men about women, The "Natural Inferiority" of Women (1991). Eve's Revenge is both a valuable source of ammunition in the ongoing battle between the sexes and a keenly hilarious parody of those who long for the day when, the battle won, "men" (a socially constructed phenomenon anyway) will be fully under the control of the wiser, more compassionate, more virtuous-that is, feminine-beings destined to succeed them on the ladder of evolution. Read Less

Goodreads reviews for Eve's Revenge: Saints, Sinners, and the Stand-up Sisters of the Ultimate Extinction of Men