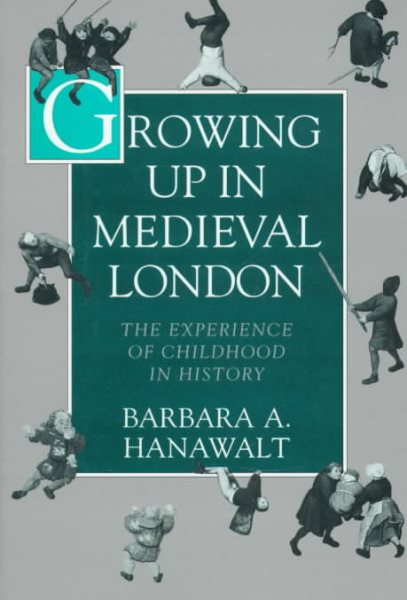 Details what childhood was like in thirteenth- and fourteenth-century London, discussing the importance of literacy and education, even for girls, and provides narratives of individual children Read More
When Barbara Hanawalt's acclaimed history The Ties That Bind first appeared, it was hailed for its unprecedented research and vivid re-creation of medieval life. David Levine, writing in The New York Times Book Review, called Hanawalt's book "as stimulating for the questions it asks as for theanswers it provides" and he concluded that "one comes away from this stimulating book with the same sense of wonder that Thomas Hardy's Angel Clare felt [:] 'The impressionable peasant leads a larger, fuller, more dramatic life than the pachydermatous king.'" Now, in Growing Up in Medieval London, Hanawalt again reveals the larger, fuller, more dramatic life of the common people, in this instance, the lives of children in London. Bringing together a wealth of evidence drawn from court records, literary sources, and books of advice, Hanawalt weaves arich tapestry of the life of London youth during the fourteenth and fifteenth centuries. Much of what she finds is eye opening. She shows for instance that--contrary to the belief of some historians--medieval adults did recognize and pay close attention to the various stages of childhood andadolescence. For instance, manuals on childrearing, such as "Rhodes's Book of Nurture" or "Seager's School of Virtue," clearly reflect the value parents placed in laying the proper groundwork for a child's future. Likewise, wardship cases reveal that in fact London laws granted orphans greaterprotection than do our own courts. Hanawalt also breaks ground with her innovative narrative style. To bring medieval childhood to life, she creates composite profiles, based on the experiences of real children, which provide a more vivid portrait than otherwise possible of the trials and tribulations of medieval youths at workand at play. We discover through these portraits that the road to adulthood was fraught with danger. We meet Alison the Bastard Heiress, whose guardians married her off to their apprentice in order to gain control of her inheritance. We learn how Joan Rawlyns of Aldenham thwarted an attempt to sellher into prostitution. And we hear the unfortunate story of William Raynold and Thomas Appleford, two mercer's apprentices who found themselves forgotten by their senile master, and abused by his wife. These composite portraits, and many more, enrich our understanding of the many stages of life inthe Middle Ages. Written by a leading historian of the Middle Ages, these pages evoke the color and drama of medieval life. Ranging from birth and baptism, to apprenticeship and adulthood, here is a myth-shattering, innovative work that illuminates the nature of childhood in the Middle Ages. Read Less

Goodreads reviews for Growing Up in Medieval London: The Experience of Childhood in History

The Western Experience, Volume B, with Powerweb