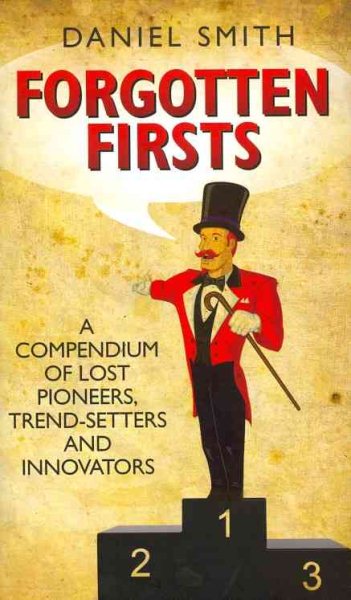 Over 100 intriguing and amusing firsts are uncovered in this wonderfully diverting compendium. Amongst them are the origins of the first: heart transplant, rollercoaster, soap opera, ski jumper, Christmas card, chocolate bar and Grand National winner and many many more. Read More
Who was the original circus ringmaster? When did the first teddy bear make an appearance? Who first produced champagne, and who invented the typewriter? Where and when were traffic lights first used? Everyone knows that Neil Armstrong was the first man on the moon and that George Washington was the first U.S. president, but what about all those other pioneers, originators, and even the occasional guinea pig, who have been lost in the footnotes of history? This a fascinating collection of those lesser-known innovators who deserve their place among the list of "famous firsts." It will probably come as no surprise that the first ever restaurateur was a Parisian; his name was Monsieur Boulanger and he originally served up soups which he called restaurants (restoratives) to his clientele. But who knew that the first circus ringmaster was a celebrated cavalryman called Philip Astley who developed his horse-riding act into a grand spectacle that established a blueprint for the circus we know today? More than 100 firsts are uncovered, including the first heart transplant, rollercoaster, soap opera, Christmas card, person to turn down an Oscar, TV chef, crossword, and much more. Read Less

Goodreads reviews for Forgotten Firsts: A Compendium of Lost Pioneers, Trend-Setters and Innovators

Monkey Mind: A Memoir of Anxiety

How to Think Like Sherlock: Improve Your Powers of Observati...