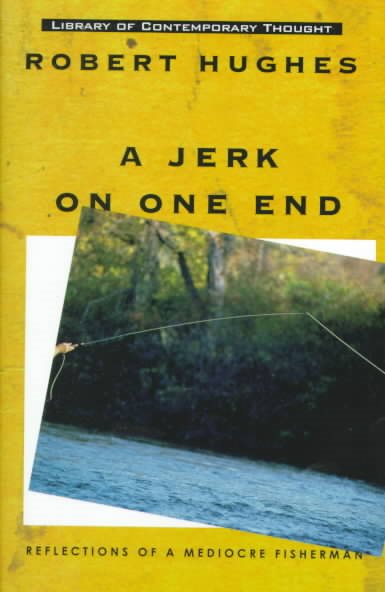 An art and cultural critic combines memoir, history, folklore, adventure, philosophical meditation, and personal reflection in an celebration of the sport of fishing Read More
"In some ways it's a ridiculous human passion," renowned author and art critic Robert Hughes confesses of his lifelong devotion to fishing. But it is a powerful, abiding passion nonetheless, one that Hughes shares with presidents and paupers, philosophers and truants, mystics and macho deep-sea warriors. Author of the acclaimed The Fatal Shore: The Epic of Australia's Founding, The Culture of Complaint, and American Visions: The Epic History of Art in America, Hughes now brings his wit, insight, critical eye, and incomparable genius for narrative to bear on the pastime he loves best.Hughes acknowledges that if he were to amortize the market value of the fish he catches in a year against the expense of catching them, he'd be shelling out about $55 a pound on bluefish alone. But clearly he's not in it for the money. In A Jerk on One End, Hughes traces his love of fishing back to his earliest boyhood on Sydney Harbor, Australia, and recounts the high and low points of his career with rod and reel--the first surge of triumph when he snagged a six-pound bonito, the shame of having his father catch him trout-fishing with live bait (the most perfidious failing in the eyes of every fly-fisher), hair-raising shark tales he picked up on the Sydney waterfront.Here too is a history of fishing going back to classical antiquity, along with meditations on the art and philosophy of fishing and deep draughts of the finest fishing writing through the ages. Hughes gazes long and hard into the shining eyes of his prey and captures the essence of each noble species in brilliant verbal portraits--the delicate striped bass, most amenable to cooking and most susceptible to urban pollutants; the infinitely treacherous tarpon; the fastidious, elusive trout; the giant bluefin tuna, which holds the dubious honor of being the most expensive and sought after animal on earth. And in one unforgettable passage, he adopts the fish's point of view and forces us to imagine the horror of being hooked and reeled into an alien element.Fishing, Hughes asserts, taught him patience as a boy and reverence for nature as man. In the concluding pages of this splendid book, he draws on this reverence to make a powerfully reasoned plea for the ecology of the sea. Mixing memoir, history, adventure, folklore, and stunning descriptions of the fathomless mysteries of the deep, Robert Hughes has written an absolutely magnificent volume. A Jerk on One End is a superb piece of prose and a profound meditation on the beauty, the excitement, and the peerless pleasures of fishing--and of life. Read Less

Goodreads reviews for A Jerk on One End: Reflections of a Mediocre Fisherman (Library of Contemporary Thought)

The Fatal Shore: The Epic of Australia's Founding