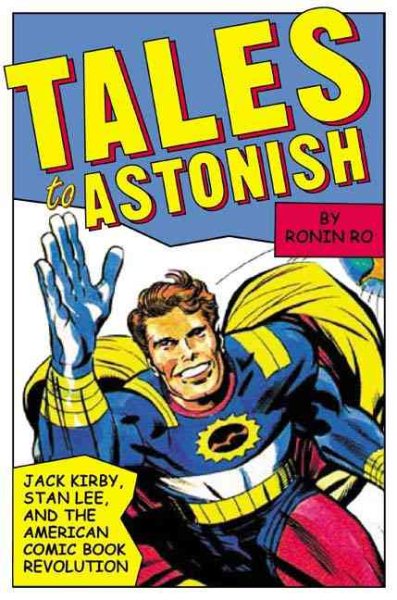 Traces the life and career of the prolific and influential comic book artist who, along with his writing partners Joe Simon and Stan Lee, developed such comic-book superheroes as Captain America, the Fantastic Four, the Incredible Hulk, the X-Men, Thor, the Silver Surfer, and others whose advent transformed the history of the American comic book. 25,000 first printing. Read More
The spectacular life and times of Jack Kirby, the legendary forefather of American comic books.For fifty years, Jack Kirby drew more pages than any other comic book artist. As talented as he was prolific, Kirby was responsible for many of the most well-known and beloved superheroes in popular culture. With his first writing partner Joe Simon, he created Captain America, DC Comics's Sandman, and the lucrative genre of the romance comic. In the 1960s, Kirby paired with Stan Lee to develop a pantheon of heroes that included, among others, the Fantastic Four, the Incredible Hulk, the X-Men, Thor, Iron Man, the Avengers, the Silver Surfer, and the Inhumans. Together with Lee, this artist and writer forever changed the American comic book by introducing angst-ridden heroes, sympathetic villains, and a dynamic visual style that has influenced every artist who followed. The inspiration behind The Amazing Adventures of Kavalier and Clay, Jack Kirby has been hailed by Wizard magazine as "Without any doubt...the single most important creator in the History of American Comic Books." In Tales to Astonish, Ronin Ro chronicles Kirby's poverty-stricken origins in the Lower East Side, his early commercial triumphs and failures, his renowned partnership with Stan Lee, his continuing artistic innovations (the production department hated him for pasting photographs into his pages), and his lengthy legal battles with Marvel comics over the ownership of his original art. An insightful portrait of one of its most enduring-and overlooked-artists, Tales to Astonish is also a lively, novelistic account of the comic book industry, from its inauspicious origins to its sensational successes. Read Less