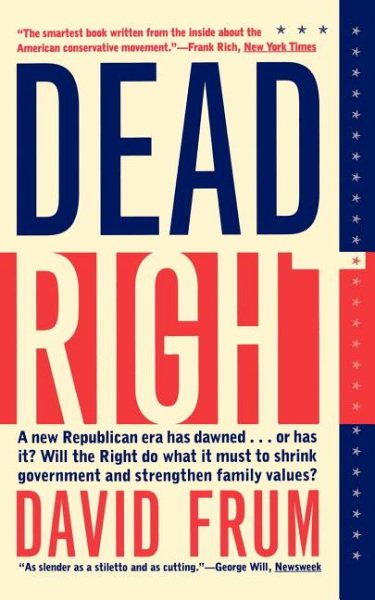 A new Republican era has dawned ? or has it? Will the Right do what it must to shrink government and strengthen family values? Read More
A Forbes columnist discusses the ideological breakdown of the Republican Party, its failure to diminish the deficit or the size of government in twelve years of control, and outlines a plan for renewal through a return to basic issues.Part reportage, part manifesto, Dead Right leads readers on a witty and opinionated tour through the chaos of post-Reagan conservatism. It explains why the &#147;Religious Right” is a phony menace &#133; why President Reagan failed to eliminate even one major spending program &#133; why the 1992 Republican convention, originally conceived as a cunning ploy, backfired &#133; and much more. David Frum analyzes the conservative movement&#39;s turn away from the economic issues that dominated the 1980s to a new preoccupation with race, ethnicity, and sex. He explains how and why conservatives decided to stop fighting Big Government and start using it. And he warns that a conservatism that loses its anti&#150;Big Government faith is doomed to futility. Dead Right dissects the new conservative position on issues ranging from education to workfare, immigration to enterprise zones, and ruthlessly scrutinizes the leadership of the conservative movement. Always lively and provocative, this is the one book that conservatives and their critics must read to understand the past and future of the American Right. Read Less