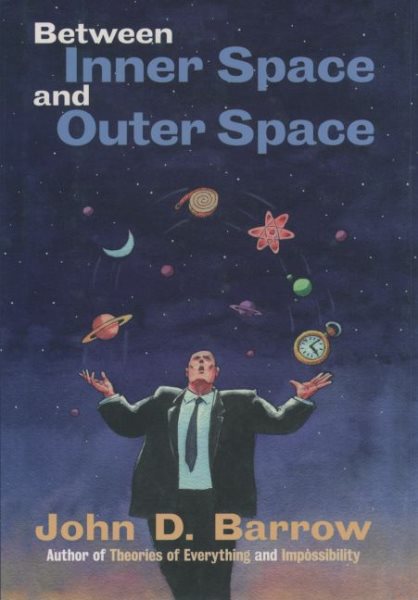 A collection of essays which examines such concepts as the Laws of Nature, life on other planets, issues of time and space, quantum reality, and how science relates to religion and aesthetics Read More
The origins of life on earth, the workings of the human mind, the mysteries of the Universe itself--profound questions such as these were once the province of philosophy and theology alone. Today they have become the staple--and indeed the hallmark--of the finest writing about science. And few science writers have tackled the big questions as persistently and as insightfully as astronomer John Barrow. Now, in Between Inner Space and Outer Space, Barrow brings together dozens of essays that offer a sweeping account of his explorations along the boundary lines of science, philosophy, and religion. Here is an invigorating tour of topics such as cosmology, evolution, Grand Unified Theories, complexity and chaos, the nature of time, super string theory, quantum mechanics, particle physics, Big Bang theory, and much more. Barrow's range is remarkable. He examines, for instance, what science can tell us about our love of music or why certain paintings appeal to us. He recounts the dramatic discoveries made by the satellite COBE (Cosmic Background Explorer) and reveals what these findings tell us about the origins of the Cosmos. He discusses the debate over the nature of the universe waged by Stephen Hawking and Roger Penrose. And he offers a thoughtful review of E.O. Wilson's Consilience, seconding Wilson's criticism of social scientists who remain quite ignorant of the key insights made by the life sciences. Leavened with a sprightly sense of humor, Between Inner Space and Outer Space illuminates modern science as it provides much food for thought about life's ultimate questions. Read Less

Goodreads reviews for Between Inner Space and Outer Space: Essays on Science, Art, and Philosophy

The Origin Of The Universe

The Book of Nothing: Vacuums, Voids, and the Latest Ideas ab...