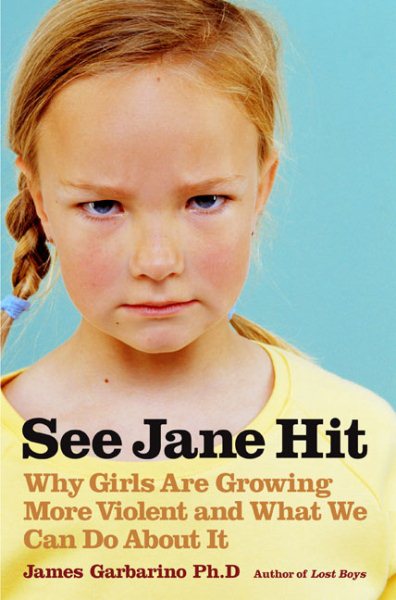 Attributes the rise of violent behavior among girls to female equality and an increased participation in sports, trends which encourage physical expression but often fail to teach appropriate management of violent feelings. Read More
From one of America's leading authorities on juvenile violence and aggression, a groundbreaking investigation of the explosion in violent behavior by girls: its causes, consequences, and possible solutions "Teen Hazing Turns Vicious," "Gang Beats Man Senseless," "Teenagers Indicted for Murder," "School Shooter Sought Revenge for Put-downs," "Youth Arrested in Murder Plot Aimed at Parents." The headlines don't seem remarkable: juvenile violence has always been with us. What is new is that these stories aren't about boys, they're about girls. Just ten years ago, almost ten boys were arrested for assault for every girl. Now the ratio is four to one, and it's dropping rapidly. What's going on with American girls? See Jane Hit is the first big-picture answer to this crucial question, a groundbreaking examination of this hidden epidemic by one of America's most respected authorities on juvenile violent aggression. In See Jane Hit, Dr. James Garbarino shows that the rise in girls' violence is the product of many interrelated cultural developments, several of which are largely positive. Girls have learned to express themselves physically in organized sports-thirty years ago, the number of boys playing organized sports was more than ten times greater than the number of girls; now we're almost at 1:1. In a number of other ways, too, the cultural foot binding that has kept girls from embracing their own physical power has been removed, which is largely to be celebrated. But nothing happens in isolation, and there's rarely such a momentous societal shift with absolutely no downside. One problem is that girls aren't being trained to handle their own physical aggression the way boys are: our methods of child-rearing culture include all sorts of mechanisms for socializing boys to express their violence in socially acceptable ways, but with girls we lag very far behind. At the same time, the culture has become more toxic for boys and girls alike, and girls' sexuality is linked with violence in new and disturbing ways. Ultimately, this brilliant, far-reaching examination of physical aggression and the "new" American girl shows us there is much we can do differently. See Jane Hit is not just a powerful wake-up call; it's a clear-eyed, compassionate prescription for real-world solutions. Read Less

Goodreads reviews for Clash of the Carriers: The True Story of the Marianas Turkey Shoot of World War II

Lost Boys: Why Our Sons Turn Violent and How We Can Save The...

Parents Under Siege: Why You Are the Solution, Not the Probl...

Lost Boys: Why our Sons Turn Violent and How We Can Save The...