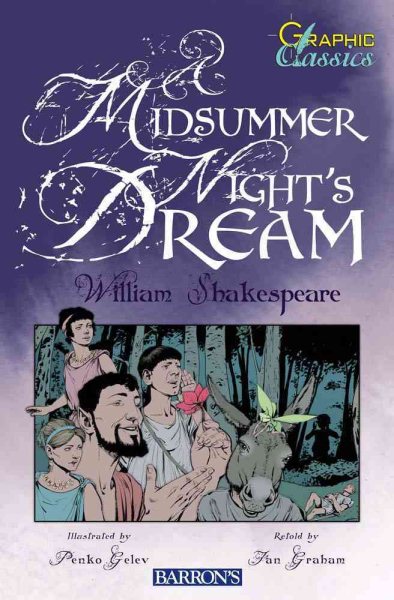 This Read More
(back cover) "Lord, what fools these mortals be." A Midsummer Night's Dream Strange things are afoot in the woods outside Athens. Two men are in love with the same woman, the King and Queen of Fairies are at loggerheads, and a mischievous sprite is about to weak havoc with a magic flower. Meanwhile, an impish fellow named Puck has really made an ass of an amateur actor called Bottom. How will it all end? One of Shakespeare's best-loved comedies is vividly and faithfully retold in graphic novel format. (front flap) The beautiful Hermia disobeys her father by refusing to marry Demetrius, who is in love with her. It happens that Hermia's true love is Lysandar. Meanwhile, Helena is jealous of Hermia, because she loves Demetrius. Their romantic tangle is only one of several stories that enliven this favorite Shakespeare comedy. Readers will also meet Oberon, King of Fairies, his clever servant Puck, the amusing actor Bottom, and many others. It's a play that is punctuated by magic spells, filled with comedy--and in its final act, good fortune to all. "Lord, what fools these mortals be" (back flap) Graphic Classics available from Barron's Adventures of Huckleberry Finn Beowulf Dr. Jekyll and Mr. Hyde Dracula Frankenstein Gulliver's Travels Hamlet The Hunchback of Notre Dame Jane Eyre Journey to the Center of the Earth Julius Caesar Kidnapped The Last of the Mohicans Macbeth The Man in the Iron Mask The Merchant of Venice A Midsummer Night's Dream Moby Dick The Odyssey Oliver Twist Romeo and Juliet A Tale of Two Cities The Three Musketeers Treasure Island 20,000 Leagues Under the Sea Wuthering Heights Read Less