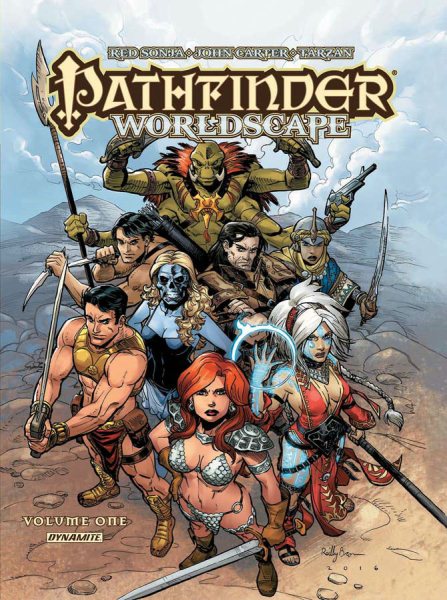 The Pathfinders Valeros, Seoni, Kyra, and Merisiel are drawn into the interdimensional Worldscape, w... Read More
The Pathfinders Valeros, Seoni, Kyra, and Merisiel are drawn into the interdimensional Worldscape, where the greatest warriors throughout the history of Barsoom, Golarion, and Earth clash in an ancient battle of life and death! Only the most dangerous among the combatants - a motley assortment which includes such legendary heroes as Red Sonja, John Carter and Tars Tarkas of Mars, the jungle adventurers Tarzan and Thun'da - have any hope of surviving the deadly gladatorial pits and joining with the Pathfinder heroes in armed revolt against their oppressors!Written by Erik Mona (Paizo Publisher and Chief Creative Officer) and featuring sensational artwork by Jonathan Lau (Kevin Smith's Bionic Man), the Worldscape saga draws the greatest fantasy heroes of literature and comics into the mythos of Paizo's award-winning fantasy world, fiction line, and tabletop RPG. Bonus materials include over thirty pages of character sheets, encounters, and world detail for the Pathfinder Roleplaying Game, including a poster map."The world of Pathfinder is a vast one and Worldscape... shows just how much fun it can be when it goes just a bit bigger." - Newsarama"Well-paced, well-drawn, and entertaining." - Multiversity Comics"The writing is straight out of a good fantasy novel, thrusting the reader into the action and having us caught up in the hullaballoo before we know what even hit us." - Outright Geekery Read Less

An Introduction to the Geometry of N Dimensions