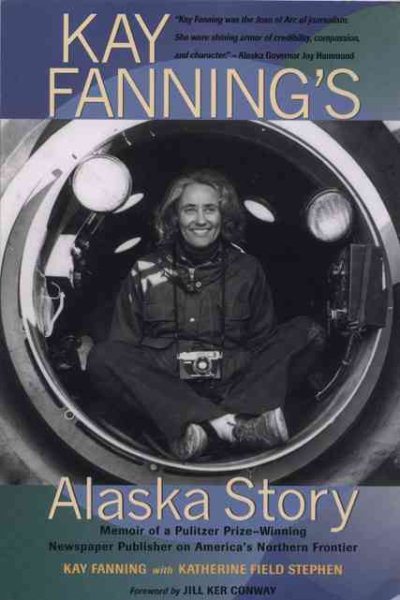 Katherine Field Stephen, herself a reporter, was determined to finish her mother’s book. And she did, by inviting eighteen of Kay’s friends and colleagues to contribute personal stories about Kay Fanning. Read More
When Kay Woodruff Field arrived in Alaska in 1965, newly divorced and seeking to make a fresh start, she took a reporter's job at the Anchorage Daily News and found a new state on the verge of great changes. Within a few years, in a partnership with her new husband, Larry Fanning, she purchased the struggling morning newspaper.When Larry died unexpectedly, Kay stepped into the role of editor and publisher, eventually turning the Daily News into Alaska's largest newspaper. Along the way, she pushed for settlement of Alaska's Native land claims and covered environmental and social issues related to construction of the trans-Alaska pipeline. Kay Fanning and her newspaper won a Pulitzer Prize in 1976 for coverage of corruption in Alaska's powerful Teamsters Union.After serving later as editor of the Christian Science Monitor, Kay began working on her Alaska memoir, but died in 2000 before finishing it. Katherine Field Stephen, herself a writer and reporter, was determined to finish her mother's book. And she did, in a way virtually unheard of in book publishing. She invited eighteen of her mother's friends, business associates, fellow journalists, and politicians to contribute personal stories about Kay and how she and her newspaper helped define Alaska's issues and shape its future. Read Less