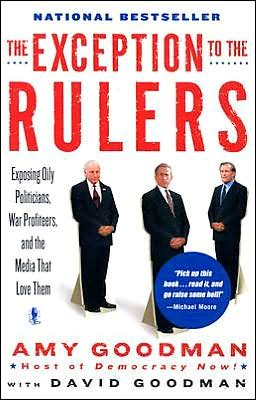 A journalist takes a look at the corporate and political hypocrisy that is rampant in the United States, commenting on the corruption of media monopolies, the deceptions of the Bush administration, and corporate influence on government. Read More
Now in paperback, the national bestseller that challenges the corporate and political hypocrisy that has silenced America n Exception to the Rulers, award-winning journalist Amy Goodman exposes the lies, corruption, and crimes of the power elite-an elite that is bolstered by large media conglomerates who obscure the truth. Her goal is 'to go where the silence is, to give voice to the silenced majority,' and she is fond of quoting Margaret Mead: 'Never doubt that a small group of thoughtful, committed people can change the world. Indeed, it's the only thing that ever has.' This book informs and empowers people to act on that principle. Read Less

Goodreads reviews for The Exception to the Rulers: Exposing Oily Politicians, War Profiteers, and the Media That Love Them

The ape and the sushi master : cultural reflections by a pri...