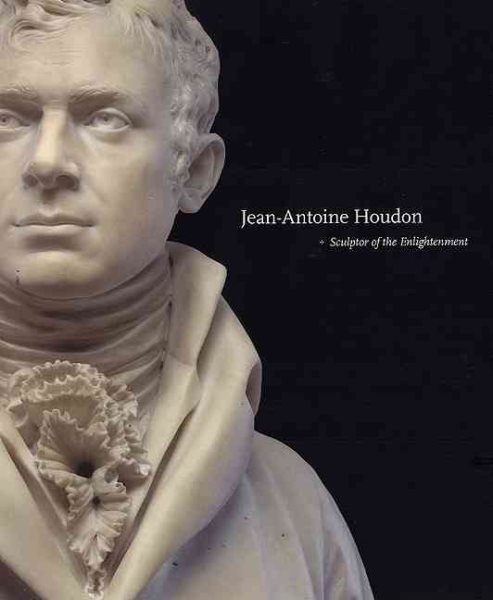 Jean-Antoine Houdon (1741-1826) has long been recognized as the greatest European portrait sculptor... Read More
Jean-Antoine Houdon (1741-1826) has long been recognized as the greatest European portrait sculptor of the late eighteenth century, flourishing during both the American and French Revolutions as well as during the Directoire and Empire in France. Whether sculpting a head of state, an intellectual, or a young child, Houdon had an uncanny ability to capture the essence of his subject with a characteristic pose or expression. Yet until now, Houdon's exquisite sculptures have never been the subject of a major exhibition.This lavish exhibition catalogue will immediately take its rightful place as the definitive work on Houdon. With more than one hundred color plates and two hundred black and white halftones, Jean-Antoine Houdon: Sculptor of the Enlightenment illustrates every stage of the sculptor's fascinating career, from his early portrayals of Louis XVI and Marie Antoinette to his stunning portraits of American patriots such as George Washington, the Marquis de Lafayette, John Paul Jones, Benjamin Franklin, and Thomas Jefferson. Indeed the images we hold dear of legendary Enlightenment figures like Diderot, Rousseau, d'Alembert, and Voltaire are based on works by Houdon. More than mere representations, these sculptures provide us fascinating, intimate glimpses into the very core of who these figures were. Houdon's genius animated even his less illustrious subjects, like his portraits of his family and friends, and filled his sculptures of children with delicacy and freshness. Accompanying the images of Houdon's masterworks are four insightful essays that discuss Houdon's views on art (based in part on a newly discovered manuscript written by the artist) as well as his prominence in the highly varied cultures of eighteenth-century France, Germany, and Russia.From aristocrats to revolutionaries, actors to philosophers, Houdon's amazingly vivid portraits constitute the visual record of the Enlightenment and capture the true spirit of a remarkable age. Jean-Antoine Houdon finally gives these gorgeous works their due. Read Less

Goodreads reviews for Jean-Antoine Houdon: Sculptor of the Enlightenment