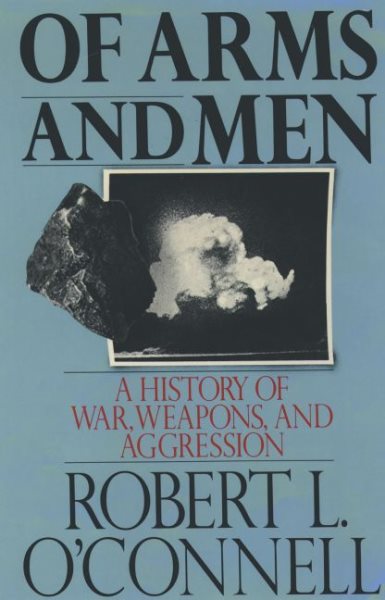 Ranging from prehistoric times to the Nuclear Age, demonstrates how social and economic conditions have determined the types of weapons and tactics employed in warfare Read More
The appearance of the crossbow on the European battle field in A.D. 1100 as the weapon of choice for shooting down knights threatened the status quo of medieval chivalric fighting techniques. By 1139 the Church had intervened, outlawing the use of the crossbow among Christians. With this edict, arms control was born. As Robert L. O'Connell reveals in this vividly written history of weapons in Western culture, that first attempt at an arms control measure characterizes the complex and often paradoxical relationship between men and arms throughout the centuries. In a sweeping narrative that ranges from prehistoric times to the nuclear age, O'Connell demonstrates how social and economic conditions determine the types of weapons and the tactics used in warfare and how, in turn, innovations in weapons technology often undercut social values. He describes, for instance, how the invention of the gun required a redefinition of courage from aggressive ferocity to calmness under fire; and how the machine gun in World War I so overthrew traditional notions of combat that Lord Kitchener exclaimed, "This isn't war!" The technology unleashed during the Great War radically altered our perceptions of ourselves, as these new weapons made human qualities almost irrelevant in combat. With the invention of the atomic bomb, humanity itself became subservient to the weapons it had produced. Of Arms and Men brilliantly integrates the evolution of politics, weapons, strategy, and tactics into a coherent narrative, one spiced with striking portraits of men in combat and penetrating insights into why men go to war. Read Less

Goodreads reviews for Of Arms and Men: A History of War, Weapons, and Aggression

Of Arms and Men: A History of War, Weapons, and Aggression b...