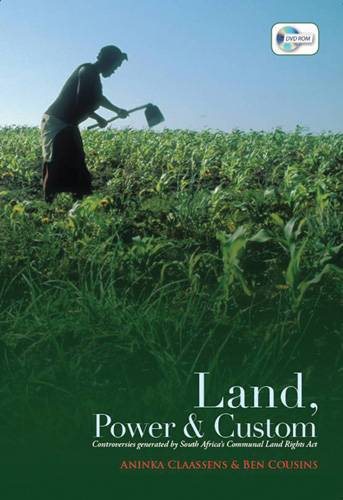 Claassens (land rights activist, researcher, writer) and Cousins (development management, U. of the Western Cape) and 11 co-contributors offer a study and critique of South Africa's recently-enacted laws that outline authority over land and land rights for 21 million people living in the poorest areas of the region. The book focuses on the issues relating to the interpretation and development of customary law and intends to contribute to public debate on land reform and the controversial legislation. An included DVD contains both current and older legislation affecting communal land and affidavits on pending legal action on land rights and authority. Annotation ©2009 Book News, Inc., Portland, OR (booknews.com) Read More
Land tenure rights are a burning issue in South Africa, as in Africa more widely. Land, Power, and Custom explores the implications of the controversial 2004 Communal Land Rights Act, criticized for reinforcing the apartheid power structure and ignoring the interests of the common people. This compilation of essays and case studies written by experts navigates through competing viewpoints to discuss the tensions between the new democratic government and traditional tribal leaders, the land rights of affected yet isolated or marginalized groups, and concerns about the constitutionality of the CLRA itself.A DVD accompanying the book contains the affidavits of four communities challenging the Act, pleadings, hearings, and submissions, as well as the entire body of South African legislation involved in this challenge, dating back to the late nineteenth century. Read Less