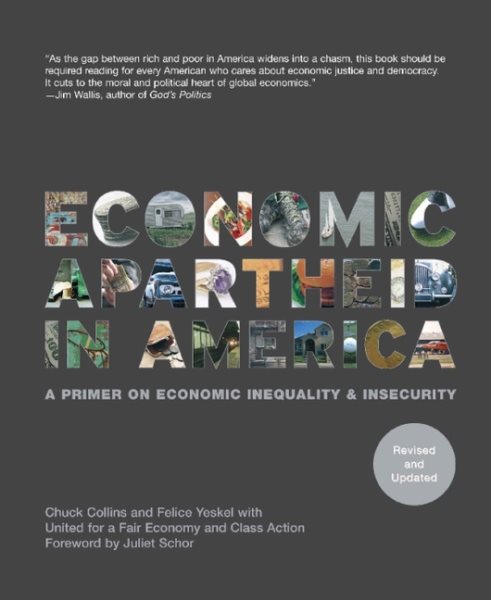 Revised to include coverage of the 2004 presidential election, a graphic exploration of the causes and manifestations of wealth disparities in the United States covers such topics as recent changes in income and wealth distribution, power and policy shifts, the 2001 and 2003 tax cuts, and recent corporate scandals. Reprint. Read More
Revised following the 2004 presidential election, a graphic portrait of the growing gap between the rich and everyone else in America. In 1968, African Americans earned 55 cents for every dollar of white income. At the current pace, it would take 581 years for African Americans to achieve income parity. States including Alabama, Tennessee, and Virginia tax food and basic needs at a higher rate than income from investments. Welfare for very low income people totaled $193 billion in 2004. Aid to "dependent corporations" exceeded $800 billion.This updated edition of the widely touted Economic Apartheid in America looks at the causes and manifestations of wealth disparities in the United States, including tax policy in light of the 2001 and 2003 tax cuts and recent corporate scandals. Published with two leading organizations dedicated to addressing economic inequality, the book looks at recent changes in income and wealth distribution and examines the economic policies and shifts in power that have fueled the growing divide. Praised by Sojurners as "a clear blueprint on how to combat growing inequality," Economic Apartheid in America provides "much-needed groundwork for more democratic discussion and participation in economic life" (Tikkun). With "a wealth of eye-opening data" (The Beacon) focusing on the decline of organized labor and civic institutions, the battle over global trade, and the growing inequality of income and wages, it argues that most Americans are shut out of the discussion of the rules governing their economic lives.Accessible and engaging and illustrated throughout with charts, graphs, and political cartoons, the book lays out a comprehensive plan for action. Charts, graphs, and black-and-white illustrations throughout. Read Less

Born on Third Base: A One Percenter Makes the Case for Tackl...

Wealth and Our Commonwealth: Why America Should Tax Accumula...

99 to 1: How Wealth Inequality Is Wrecking the World and Wha...