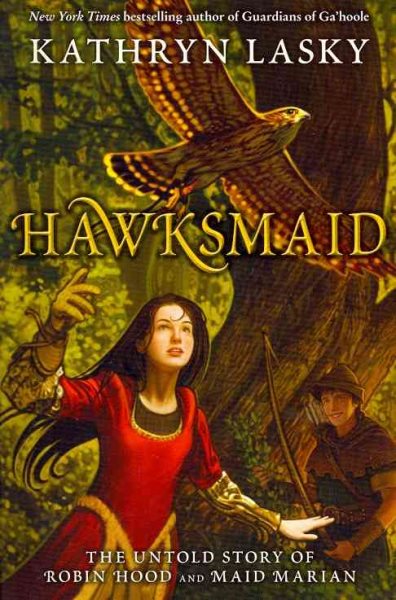 In twelfth-century England, Matty grows up to be a master falconer, able to communicate with the devoted birds who later help her and Fynn, also known as Robin Hood, to foil Prince John's plot to steal the crown. Read More
Before she was Maid Marian, Robin Hood's legendary love, she was simply known as Matty. . . .Daughter of one of England's most famous falconers, Matty knows her destiny lies with her father's magnificent birds even before she begins to hear their thoughts and speak their language. As tragedy strikes close to home and the sinister sheriff of Nottingham rises to power, Matty's friend Fynn is forced to become Robin Hood and she herself becomes Maid Marian. In a world of kidnapping, royalty, daring adventure, and deadly peril, Robin needs Matty and her beautiful merlin Marigold to help save a kingdom. Bestselling author Kathryn Lasky soars to magnificent new heights here, giving us a bold tale of bravery and romance. Read Less

Goodreads reviews for Hawksmaid: The Untold Story of Robin Hood and Maid Marian

Shadows In The Water: A Starbuck Family Adventure

Wolves of the Beyond #2: Shadow Wolf

The Capture (Guardians of Ga'hoole, Book 1)