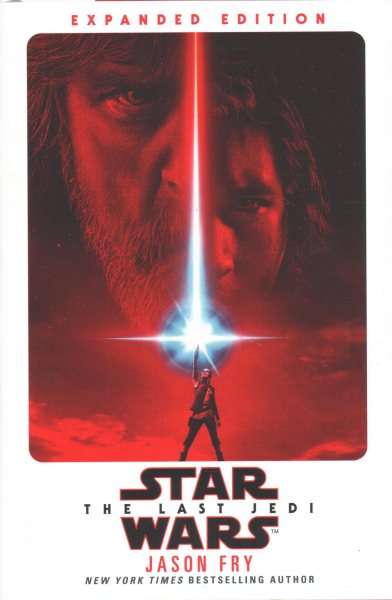 Rey attempts to convince a reluctant Luke Skywalker to aid the Resistance while Finn, Poe, Leia, and their new friend Rose battle the might of the First Order, Supreme Leader Snoke, and his disciple, Kylo Ren. Read More
NEW YORK TIMES BESTSELLER • Written with input from director Rian Johnson, this official adaptation of Star Wars: The Last Jedi expands on the film to include scenes from alternate versions of the script and other additional content.   From the ashes of the Empire has arisen another threat to the galaxy’s freedom: the ruthless First Order. Fortunately, new heroes have emerged to take up arms—and perhaps lay down their lives—for the cause. Rey, the orphan strong in the Force; Finn, the ex-stormtrooper who stands against his former masters; and Poe Dameron, the fearless X-wing pilot, have been drawn together to fight side-by-side with General Leia Organa and the Resistance. But the First Order’s Supreme Leader Snoke and his merciless enforcer Kylo Ren are adversaries with superior numbers and devastating firepower at their command. Against this enemy, the champions of light may finally be facing their extinction. Their only hope rests with a lost legend: Jedi Master Luke Skywalker.   Where the action of Star Wars: The Force Awakens ended, Star Wars: The Last Jedi begins, as the battle between light and dark climbs to astonishing new heights.   Featuring an 8-page color photo insert of thrilling images from the hit movie Read Less

Star Wars Rebels Servants of the Empire The Secret Academy

Journey to Star Wars: The Force Awakens The Weapon of a Jedi...