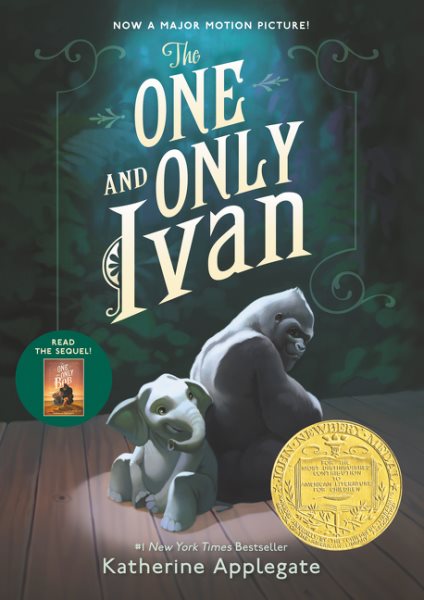 When Ivan, a gorilla who has lived for years in a down-and-out circus-themed mall, meets Ruby, a baby elephant that has been added to the mall, he decides that he must find her a better life. Read More
The #1 New York Times bestselling and Newbery Award-winning novel The One and Only Ivan is now a major motion picture streaming on Disney+This unforgettable novel from renowned author Katherine Applegate celebrates the transformative power of unexpected friendship. Inspired by the true story of a captive gorilla known as Ivan, this illustrated book is told from the point of view of Ivan himself.  Having spent twenty-seven years behind the glass walls of his enclosure in a shopping mall, Ivan has grown accustomed to humans watching him. He hardly ever thinks about his life in the jungle. Instead, Ivan occupies himself with television, his friends Stella and Bob, and painting. But when he meets Ruby, a baby elephant taken from the wild, he is forced to see their home, and his art, through new eyes.In the tradition of timeless stories like Charlotte's Web and Stuart Little, Katherine Applegate blends humor and poignancy to create an unforgettable story of friendship, art, and hope.The One and Only Ivan features first-person narrative; author's use of literary devices (personification, imagery); and story elements (plot, character development, perspective).This acclaimed middle grade novel is an excellent choice for tween readers in grades 5 to 8, for independent reading, homeschooling, and sharing in the classroom.Plus don't miss The One and Only Bob, Katherine Applegate's return to the world of Ivan, Bob, and Ruby! Read Less

Goodreads reviews for The One and Only Ivan

One and Only Ivan