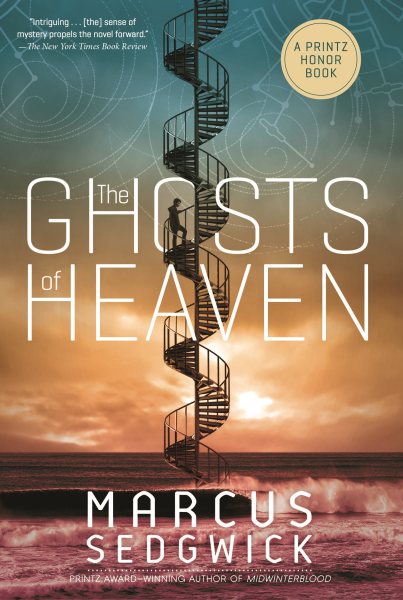 Four linked stories of obsession and creation through the ages include the tales of a Paleolithic girl whose cave drawings become an earliest writing form and a 1920s asylum doctor whose own sanity is tested by a mad poet. Read More
Timeless, beautiful, and haunting, spirals connect the four episodes of The Ghosts of Heaven, the mesmerizing new novel from Printz Award winner Marcus Sedgwick. They are there in prehistory, when a girl picks up a charred stick and makes the first written signs; there tens of centuries later, hiding in the treacherous waters of Golden Beck that take Anna, who people call a witch; there in the halls of a Long Island hospital at the beginning of the 20th century, where a mad poet watches the oceans and knows the horrors it hides; and there in the far future, as an astronaut faces his destiny on the first spaceship sent from earth to colonize another world. Each of the characters in these mysterious linked stories embarks on a journey of discovery and survival; carried forward through the spiral of time, none will return to the same place.This title has Common Core connections. Read Less

Goodreads reviews for The Ghosts of Heaven