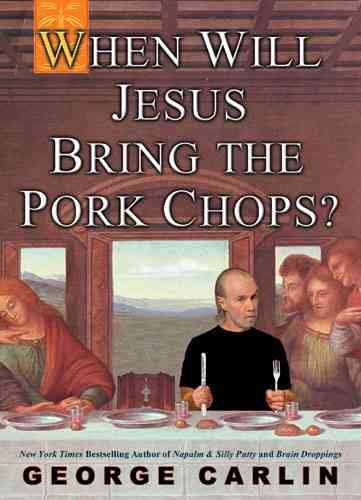 In a collection of irreverent humor, the author presents his observations and opinions on the foibles and follies of modern life, taking on such topics as the media, the battle of the sexes, hygiene, evasive language, and politics. Read More
On the heels of George Carlin's #1 New York Times bestseller Napalm & Silly Putty comesWhen Will Jesus Bring the Pork Chops?--infused with Carlin's trademark irreverent humor and biting cultural observations.Here we go again . . . George Carlin's hilarious When Will Jesus Bring the Pork Chops? offers his cutting-edge opinions and observational humor on everything from evasive euphemistic language to politicians to the media to dead people. Nothing and no one is safe!Despite the current climate of political correctness, Carlin is not afraid to take on controversial topics:Carlin on the media: The media comprises equal parts business, politics, advertising, public relations, and show business. Nice combination. Enough bull for Texas to open a chain of branch offices.Carlin on the battle of the sexes: Here's all you have to know about men and women: women are crazy, men are stupid. And the main reason women are crazy is that men are stupid.Carlin on hygiene: When did they pass a law that says the people who make my sandwich have to be wearing gloves? I'm not comfortable with this. I don't want glove residue all over my food; it's not sanitary. Who knows where these gloves have been? Carlin on evasive language: Just to demonstrate how far using euphemisms in language has gone, some psychologists are now actually referring to ugly people as those with "severe appearance deficits." Hey, Doctor. How's that for "denial"?Carlin on politics: No self-respecting politician would ever admit to working in the government. They prefer to think of themselves "serving the nation." To help visualize the service they provide the country, you may wish to picture the things that take place on a stud farm.The thinking person's comic who uses words as weapons, Carlin puts voice to issues that capture the modern imagination. For instance, why are there Ten Commandments? Are UFOs real? What will the future really be like? This brand-new collection tackles all that and more.In When Will Jesus Bring the Pork Chops? Carlin's razor-sharp observations demolish everyday values and leave you laughing out loud--delivering exactly what his countless fans have been waiting for. Read Less

Goodreads reviews for When Will Jesus Bring the Pork Chops?

George Carlin: All My Stuff