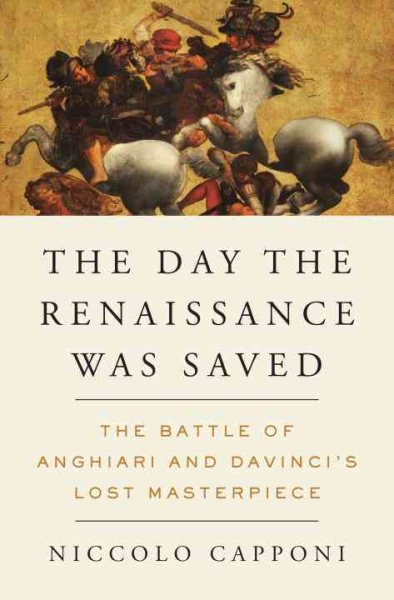 Presents an account of the battle of Anghiari in 1440, interweaving a narrative of the battle with the mystery of a missing Leonardo da Vinci painting. Read More
It was a battle that change the course of history, and was immortalized in a massive painting by Leonardo da Vinci that was thought lost for centuries . . . until now.   On a sweltering day in June 1440, near the Tuscan town of Anghiari, the simmering conflict among Italy’s principal powers exploded into a battle whereby Florence and the papal States joined with Venice to defeat the previously unstoppable army of Milan. The shocking denoument would open the way for the flowering of Florentine culture, and the birth of what we now know as the Renaissance.There was, perhaps, no stunning evidence of this than a massive painting by Leonardo da Vinci commemorating the Battle of Anghiari, a masterpiece that quickly became famous—but then was mysteriously lost. Until recently, that is, when researchers made a breathtaking discovery of the location where it has been hidden for more than four hundred years. In The Day the Renaissance Was Saved, Niccolò Capponi—a direct descendent of Niccolò Machiavelli, as well as of a Florentine general who was a key strategist of the campaign at Anghiari—weaves the story of da Vinci’s lost masterpiece through the narrative of the history-changing battle, and offers context on the development of humanist thought and the political intrigues of fifteenth-century Italy. Complete with maps and twenty-four color images, this is military history, political history, and art history all rolled into one, from a scholar whose ancestors were key players in the scheming, plotting, and fighting that led to this pivotal moment in Western history. Read Less

Goodreads reviews for The Day the Renaissance Was Saved: The Battle of Anghiari and da Vinci's Lost Masterpiece

Birth of a Cook