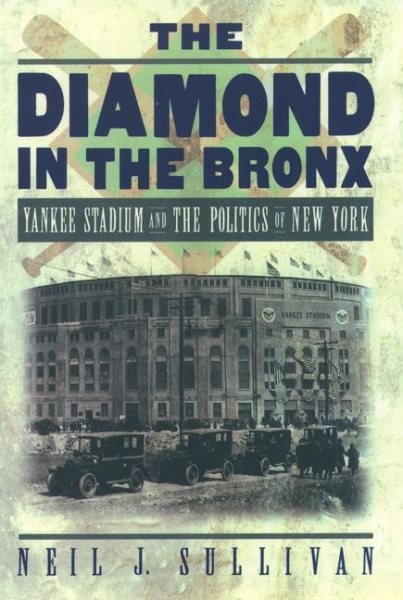 A panoramic history of Yankee Stadium and its importance to the people and politics of New York looks at the teams, the mayors, and players who made this fascinating story unfold. Read More
No sport has mattered more to Americans than baseball--and no team has had a greater impact on baseball than the New York Yankees. Now Neil Sullivan delivers a narrative worthy of his fabled subject, in this marvelous history of Yankee Stadium. Fans have a box-seat at the Stadium's first Opening Day: The stunning visual impact of the baseball's first true stadium, the festivities, the players (including Babe Ruth who christened the Stadium with its first home run), and the game in which the Yankees beat the Boston Red Sox 4-1. The Stadium was immediately known as "The House That Ruth Built," but Sullivan takes us behind the scenes to meet the politicians, businessmen and fixers who were even more responsible for the Stadium than the Babe was: Colonel Jacob Ruppert, the beer baron and Tammany Hall insider who bought the Yankees and built the Stadium; Mayors like Jimmy Walker who reigned during the Yankees first Golden Age, John Lindsay who fought hard for liberal causes in the 1960s but even harder for a refurbished Stadium, and Rudy Giuliani, who has taken a hard-nosed approach to most welfare but who supports a stadium subsidy for the Yankees. Here too are the great seasons including the cross town World Series rivalries with the New York Giants and the Brooklyn Dodgers. Sullivan looks at the legendary players like Joe DiMaggio and Mickey Mantle as well as lesser lights like Jake Powell to see their impact beyond the diamond. Along the way, Sullivan uses the story of the Stadium to examine issues ranging from racial integration and urban renewal to the reasons why New York City, even during tough times, has come to adopt the Stadium as a public obligation. Neil Sullivan knows baseball and city politics and the connections between the two. In these pages, he tells how Yankee Stadium is not just the most revered venue in American sports, but also a part of urban history as compelling as the grandest baseball legend. Read Less

Goodreads reviews for The Diamond in the Bronx: Yankee Stadium and the Politics of New York

The Pied Piper of Hamelin, and other selections (The Reading...