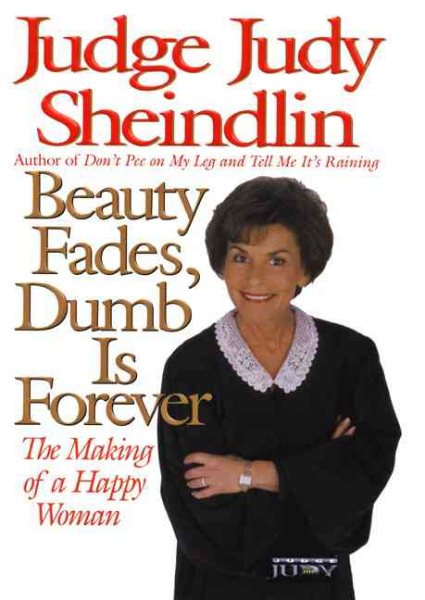 Explores most women's almost automatic need to defer to men and demonstrates how women can grow in confidence and inner strength Read More
"My father was a kidder, and he could usually make me laugh; in laughing I was able to feel better about myself. He also gave me a piece of advice about beauty that has stayed with me. &#39;Beauty fades&#39; he used to say, &#39;but dumb? Dumb is forever.&#39; "Judge Judy&#39;s father impressed upon her that a bright intellect, a curious mind, and a passion for learning are priceless commodities. "For as long as I can remember," she writes, "the worst insult someone could give me was to say &#39;You&#39;re stupid.&#39; In fact to this day, it&#39;s second nature for me when I&#39;m on the bench to point a finger to the side of my head and ask, &#39;Does it say stupid here?&#39; "--the implied answer being a resounding no.In the course of her career as a family court judge and a presiding judge on the popular courtroom show that bears her name, Judge Judy has seen over and over again, the devastating fallout for women who have made stupid choices on marriage, parenting and their future. She has seen women make excuses for me who abuse them and women who tolerate demeaning and demoralizing conditions at work. She has seen women who, instead of choosing mates, allowed themselves to be chosen. She has seen women who elected to defer to men instead of their own judgment.Here, the savvy, opinionated, and irrepressible Judge Judy exposes, with her trademark wit and wisdom, these dirty little secrets so many women share and offers her own take on the destructive repercussions they have on women. Using real cases involving women of every background--from the most affluent and successful to young girls just starting out--as well as stories from her own life, Judge Judy shows women how to fix their attitude and, equally important, how to teach their daughters to follow their dreams by keeping their individuality intact.As a judge, wife, mother, and grandmother, judge Judy understands the lasting currency of self-esteem and independence, and when she voices her tough-minded opinions daily in her courtroom, everyone listens. In Beauty Fades, Dumb is Forever, she instills in women--with the help of provocative and hilarious examples from her own life--the urgency of building a solid foundation within. On building character. On nourishing yourself. On learning from mistakes and fighting battles you can&#39;t win. On understanding what sex can and cannot do for you. On the importance of humor and self reliance. Her straight talk tells women to get on with it and never forget that smart is forever, too. Read Less

Goodreads reviews for Beauty Fades, Dumb Is Forever: The Making of a Happy Woman

Don't Pee on My Leg and Tell Me It's Raining: America's Toug...

Keep It Simple, Stupid: You're Smarter Than You Look