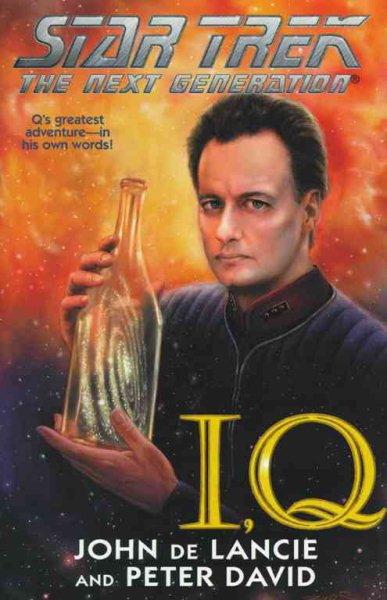 The mischievous super-being Q joins forces with his nemesis, Captain Picard, to save the universe Read More
The enigmatic entity known as Q remains one of the greatest mysteries in the universe, yet no one, perhaps, understands Q as well as actor John de Lancie, who has played Q. on television for more than a decade. Now de Lancie and Peter David, the bestselling author of such acclaimed novels as Q-in-Law and Q-Squared have joined forces to send Q on an unforgettable cosmic odyssey, told from the mischievous trickster's own unique point of view. The Maelstrom, a metaphysical whirlpool of apocalyptic proportions, is pulling all of reality into its maw, devouring the totality of time and space while bringing together people and places from throughout the universe. The Q Continuum pronounces that the end of everything has come, but Q refuses to meekly accept the end of all he has known. Defying the judgement of the Continuum, he sets out to derail doomsday -- at whatever the cost. Q has been everywhere and done everything, but now he's in for a cosmic thrill ride beyond even his own astonishingly unlimited imagination. Old friends and adversaries wait in unexpected places, transcendent hazards abound, and the multiverse's most unlikely savior encounters wonders and dangers enough to render Q himself speechless. Almost. Can even Q, reluctantly assisted by Jean Luc Picard, prevent the Universe As We Know It from literally going down the drain? I, Q is a wild and witty voyage through the secret soul of creation -- as only Q can tell it! Read Less

Goodreads reviews for I, Q (Star Trek The Next Generation)