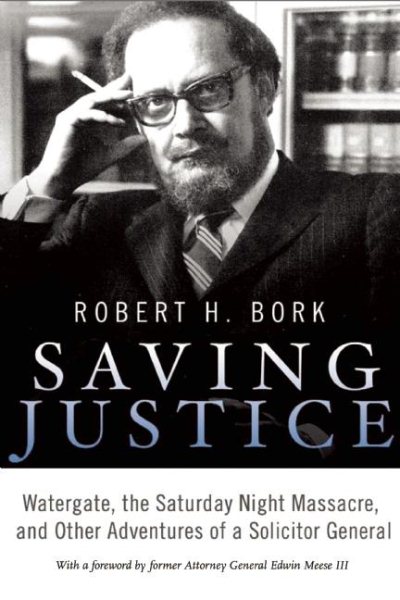 Provides an account of the inner workings of the Justice Department as it handled Watergate and the constitutional crises presented by the Nixon Administration, from the perspective of the former Soliciter General. Read More
<div>In June 1973, Judge Robert Bork was plucked from a quiet life of academia at Yale University and planted in the tumultuous soil of constitutional crisis by a Nixon administration barreling toward collapse. From the ousting of Vice President Spiro Agnew to the discharge of the Watergate special prosecutor, an event known as the Saturday Night Massacre, <i>Saving Justice</i> offers a firsthand, insider account of the whirlwind of events that engulfed the administration during the last half of 1973 and the first few months of 1974. This important volume provides a revelatory look into the inner workings of the Justice Department during some of the most consequential months of the Nixon administration.</div> Read Less

Goodreads reviews for Saving Justice: Watergate, the Saturday Night Massacre, and Other Adventures of a Solicitor General

The Tempting Of America (The Political Seduction of the Law)