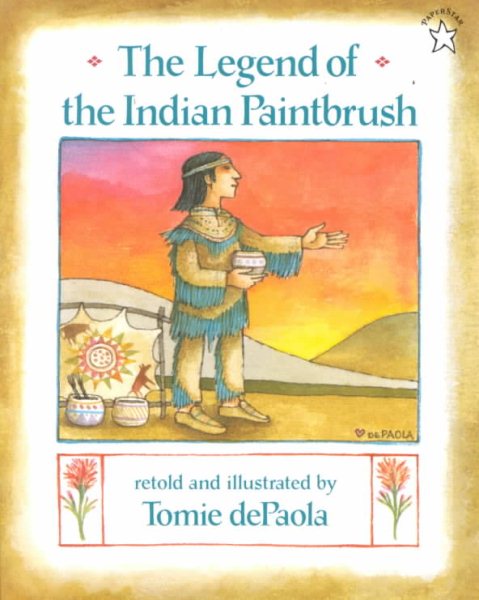 Little Gopher follows his destiny, as revealed in a Dream-Vision, of becoming an artist for his people and eventually is able to bring the colors of the sunset down to the earth. Read More
In spring, the hills and meadows of Texas and Wyoming are ablaze with the reds, oranges, and yellows of the Indian Paintbrush. How this striking plant received its name is told in an old Indian legend.Many years ago, when the People traveled the Plains, a young Indian boy had a Dream-Vision in which it was revealed that one day he would create a painting that was as pure as the colors of the evening sky at sunset. The boy grew up to become the painter of the tribe, but although he found a pure white buckskin for a canvas and made paints from the brightest flowers and the reddest berries, he could not capture the sunset.How the young Indian artist finally fulfills his Dream-Vision is lovingly told and illustrated by Tomie dePaola, in words and pictures that capture the spirit and beauty of this dramatic legend. Read Less

Goodreads reviews for The Legend of the Indian Paintbrush