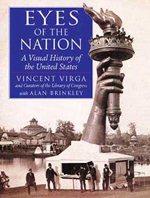 A magnificent one volume pictorial and narrative history of the United States with more than five hundred exceptional illustrations, many reproduced here for the first time. Read More
An incomparable visual history of the United States--engrossing in its narrative, pictorially sumptuous, and exhilarating(if occasionally sobering) in its epic sweep across five centuries. Never before has America's past been made so intriguingly accessible, both to the eyes and to the mind. Eyes of the Nation profits from seven chapters of lucid historical commentary by the distinguished historian Alan Brinkley, but at its core is a bountiful narrative-in-pictures drawn from the millions of maps, prints, photographs, posters, manuscripts, motion pictures, and other treasures in the Special Collections of the Library of Congress. In vivid and inclusive fashion, the book proceeds from the first encounters of Europeans and Indians, through colonial days and the founding of the nation, industrialization and the western expansion, and the catastrophes and transformations of the nineteenth and twentieth centuries, right up to the present day. Thanks to brilliant art selection by Vincent Virga and the Library of Congress's Curators, every stage of the nation's development, every swerve in its fortunes, assumes arresting visual form. In its audacious and sophisticated approach to the show-and-tell of history--as visual as it is textual, as thorough as it is irresistibly anecdotal--Eyes of the Nation is without peer. Vincent Virga has been called America's foremost picture editor. He has researched, edited, and designed picture sections for over 150 books, most recently for Living History by Hillary Rodham Clinton, as well as the full-length photo essay, The Eighties (with a foreword by Richard Rhodes), Eisenhower (with Michael Beschloss), and Summer, an anthology. He has published three novels, Gaywyck, A Comfortable Corner, and Vadriel Vail. He is also completing a book exploring maps as cultural documents with the Library of Congress titled Cartographia: Mapping Civilization. Since the Special Collections were established in 1897, the Curators of the Library of Congress have played a crucial role in acquiring and maintaining the Library's collections, particularly those that document the American Experience. Eyes of the Nation is the first book for the general reader on which the Curators have collaborated. Alan Brinkley is Provost and Professor of History at Columbia University. His previous books include Voices of Protest: Huey Long, Father Coughlin, and the Great Depression, which won the American Book Award for History, and The End of Reform: New Deal Liberalism in Recession and War. His essays, articles, and reviews have appeared in the American Historical Review, the Journal of American History, the New York Times Book Review, the New York Review of Books, the Times Literary Supplement, The New Republic, and other publications. Read Less

Goodreads reviews for Eyes of the Nation: A Visual History of the United States