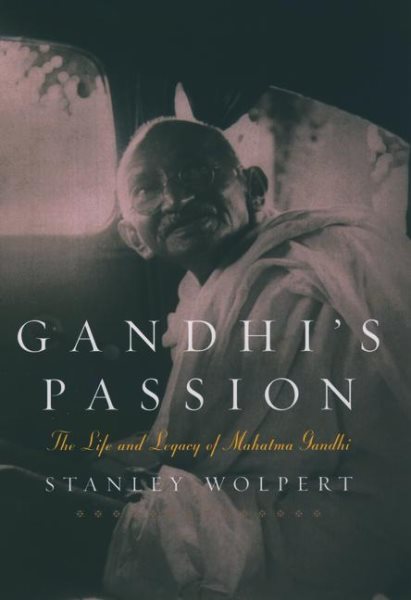 Celebrates the life and work of India's "Great Soul," focusing on his non-violent struggle to end British imperial domination of India, and offering insight into why modern India has rejected Gandhi's nonviolent idealogies and joined the nuclear arms race. Read More
More than half a century after his death, Mahatma Gandhi continues to inspire millions throughout the world. Yet modern India, most strikingly in its decision to join the nuclear arms race, seems to have abandoned much of his nonviolent vision. Inspired by recent events in India, Stanley Wolpert offers this subtle and profound biography of India's "Great Soul."Wolpert compellingly chronicles the life of Mahatma Gandhi from his early days as a child of privilege to his humble rise to power and his assassination at the hands of a man of his own faith. This trajectory, like that of Christ, was the result of Gandhi's passion: his conscious courting of suffering as the means to reach divine truth. From his early campaigns to stop discrimination in South Africa to his leadership of a people's revolution to end the British imperial domination of India, Gandhi emerges as a man of inner conflicts obscured by his political genius and moral vision. Influenced early on by nonviolent teachings in Hinduism, Jainism, Christianity, and Buddhism, he came to insist on the primacy of love for one's adversary in any conflict as the invincible power for change. His unyielding opposition to intolerance and oppression would inspire India like no leader since the Buddha--creating a legacy that would encourage Martin Luther King, Jr., Nelson Mandela, and other global leaders to demand a better world through peaceful civil disobedience.By boldly considering Gandhi the man, rather than the living god depicted by his disciples, Wolpert provides an unprecedented representation of Gandhi's personality and the profound complexities that compelled his actions and brought freedom to India. Read Less

Goodreads reviews for Gandhi's Passion: The Life and Legacy of Mahatma Gandhi

Gandhi's Passion: The Life and Legacy of Mahatma Gandhi