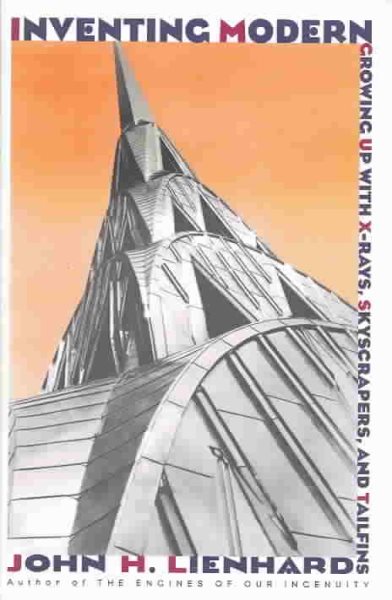 An exploration of the technology and drive that marked the first half of the twentieth century identifies cultural concepts that prompted unprecedented advancements, citing the author's own observations of the era's developments from the perspective of a child and a newcomer to America. By the author of The Engines of Our Ingenuity. (Technology) Read More
Modern is a word much used, but hard to pin down. In Inventing Modern, John H. Lienhard uses that word to capture the furious rush of newness in the first half of 20th-century America. An unexpected world emerges from under the more familiar Modern. Beyond the airplanes, radios, art deco, skyscrapers, Fritz Lang's Metropolis, Buck Rogers, the culture of the open road--Burma Shave, Kerouac, and White Castles--lie driving forces that set this account of Modern apart. One force, says Lienhard, was a new concept of boyhood--the risk-taking, hands-on savage inventor. Driven by an admiration of recklessness, America developed its technological empire with stunning speed. Bringing the airplane to fruition in so short a time, for example, were people such as Katherine Stinson, Lincoln Beachey, Amelia Earhart, and Charles Lindbergh. The rediscovery of mystery powerfully drove Modern as well. X-Rays, quantum mechanics, and relativity theory had followed electricity and radium. Here we read how, with reality seemingly altered, hope seemed limitless. Lienhard blends these forces with his childhood in the brave new world. The result is perceptive, engaging, and filled with surprise. Whether he talks about Alexander Calder (an engineer whose sculptures were exercises in materials science) or that wacky paean to flight, Flying Down to Rio, unexpected detail emerges from every tile of this large mosaic. Inventing Modern is a personal book that displays, rather than defines, an age that ended before most of us were born. It is an engineer's homage to a time before the bomb and our terrible loss of confidence--a time that might yet rise again out of its own postmodern ashes. Read Less

Goodreads reviews for Inventing Modern: Growing up with X-Rays, Skyscrapers, and Tailfins

Inventing Modern: Growing up with X-Rays, Skyscrapers, and T...

Galaxies (Voyage Through the Universe Series)